The Sixers would reportedly be looking to get Jaylen Brown back as part of any trade package, but does a deal make sense? 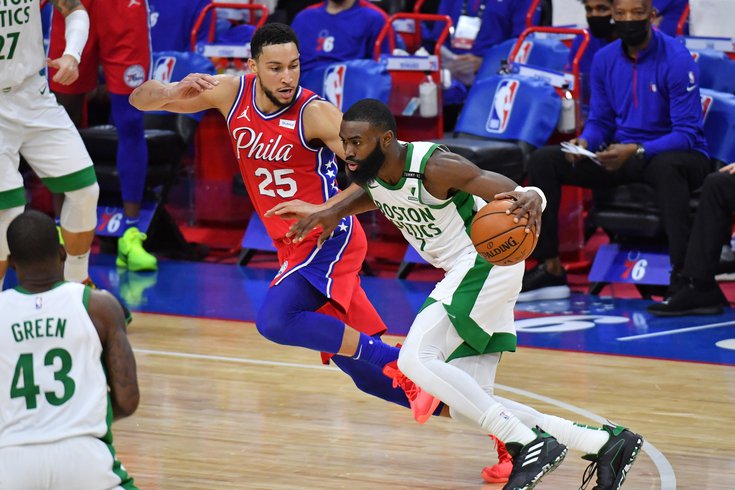 Could Ben Simmons and Jaylen Brown be switching uniforms?

As the Ben Simmons saga drags on to start another month with both sides far apart on what they want to be accomplished, other teams continue to inquire about the possibility of bringing Simmons in. And the latest team reportedly in the mix is a doozy — the Boston Celtics have come calling about Simmons, according to a new report from The Athletic.

Here's what Shams Charania had to say in a piece on Monday, following a non-update update on Simmons' mental health situation:

In the meantime, the 76ers have not had any deal form for Simmons. Morey has continued to set a high price threshold for any deal involving the runner-up for the 2021 NBA Defensive Player of the Year. Philadelphia is once again the No. 1 seed in the Eastern Conference so far this season, beginning the campaign 8-2 with quality wins while playing through absences and the Simmons situation.

The Boston Celtics have engaged in conversations with the 76ers revolving around Simmons and expressed interest in the 6-foot-11 guard, sources tell The Athletic. Talks have been fluid with no traction as of yet, those sources say. Any potential Simmons deal with the Celtics would have to include All-Star forward Jaylen Brown, an ascending talent who is in the midst of another career season, averaging 25.6 points, 6.1 rebounds and 2.5 assists.  [The Athletic]

If you haven't been paying attention to the Celtics this season, they have gotten off to one of the most tumultuous starts of any team in the league. With former Sixers assistant Ime Udoka taking over as head coach (and former Sixers players Josh Richardson and Al Horford on the roster), the Celtics have made a number of important adjustments, including a defensive scheme change that has swung wildly in effectiveness each game. And after one particularly large collapse against the Chicago Bulls last week, veteran guard Marcus Smart called out Boston's wing stars, Jayson Tatum and Jaylen Brown, for not sharing the basketball.

“I would just like to play basketball,” Smart said as part of a long answer regarding their late-game offense. “Every team knows we are trying to go to Jayson and Jaylen and every team is programmed and studies to stop Jayson and Jaylen. I think everybody’s scouting report is to make those guys try to pass the ball. They don’t want to pass the ball and that’s something that they’re going to learn."

The comments made waves around the league, and the Celtics would later hold a team meeting in order to clear the air and get back on the right track. Going 2-1 since those comments were made, this is only the most recent example of fragile chemistry in the Celtics' locker room, which has been on a roller coaster ride for years at this point.

Their interest in Simmons is curious to some extent, given how easily they were able to take him out of most games in the Brad Stevens era, including during a disaster playoff series during his rookie year. But there are on-paper arguments to going after Simmons for sure. The primary bigs in Boston (Horford and Robert Williams) offer different skill sets alongside Simmons, with Horford's ability to space the floor and Williams' rim-running impact much different than Joel Embiid's style of play. Simmons' best run as a professional came during a stretch in 2020 with Embiid on the shelf and Horford starting at center, including a 34-point triple-double against the Brooklyn Nets in late January, perhaps the best individual game he has ever played. And given the Celtics' apparent need to swap a ball-dominant player for a pass-first player, Simmons is the top name on the market as it stands right now.

But what would the Celtics be willing to give up to make that happen? Charania floating Brown's name is rather interesting, because for all of Boston's issues this season, Brown has taken another legitimate step forward in his sixth NBA season, fresh off of his first All-Star appearance last year, and would seem to be the sort of player the Celtics would want to hold onto. But with Jayson Tatum viewed as "the guy" in Boston and their other pieces less attractive in a deal with a rival, Brown is probably where the conversation would start and end from a Philly perspective.

His fit with the Sixers would be interesting, given what the team seems to need right now. Brown has turned himself into a multi-level scorer over the last six years, becoming a reliable high-volume shooter despite questions about his shot coming into the league. Brown came into the NBA with prototypical size and athleticism on the wing, so the finesse skills he has added to his game over time have made him quite a complete offensive player. He has gotten off to a slow start in some departments as a shooter — Brown is shooting just 34.1 percent on catch-and-shoot looks so far this season, down significantly from his numbers the last two seasons — but has made up for it as a pull-up shooter, hitting an outrageous 57.1 percent of his pull-up threes on nearly two of those attempts per game. Those pull-up numbers will obviously regress at some point, but Brown has become an effective midrange guy and high-level finisher around the rim, where he should be able to increase Philly's free-throw output as well.

Defensively, he's not on Simmons' level, but with Simmons not in the lineup, adding a player who would actually suit up for you would theoretically help. Throughout his career, the book on him has been fairly consistent, with Brown capable of playing elite on-ball defense at his best but often struggling to maintain focus when he's away from the play. The hope would be that Brown gives you an option to check the biggest, burliest wings that tend to dominate playoff series, with assistant coach and defensive whiz Dan Burke getting more from him away from the ball to round out what could be a great defensive package.

Acquiring a true wing in Brown's cut is not going to simplify things for this group the way it would if they could swing a deal for an elite guard, a la Damian Lillard. Brown has real deficiencies as a playmaker, as Marcus Smart recently noted, and the Sixers would still have a need for a shot creator who can create good looks for others and ease the burden on Embiid as the hub of the offense. There would also be a learning curve for Brown on offense even with him playing some of the best ball of his career right now, given the difference between Embiid and every other big man he has played with. One of Brown or Tobias Harris would probably see their attempts cut into, needing to become more active and dangerous as off-ball players to accommodate another volume scorer.

That said, Brown would undoubtedly make the Sixers a better and more talented team than they are with Simmons refusing to play for them, and the Sixers would suddenly have lineup flexibility when everybody is healthy. Gaining a big, athletic wing-like Brown would allow you to play some defense-first lineups with guys like Matisse Thybulle and Danny Green alongside him, smothering opposing ballhandlers and empowered to switch frequently. Brown's ability to self-create would be a big boost to Philadelphia's offense when they get into jams mid-game, where they could simply rely on him to win one-on-one battles with other teams. And the addition of another star-level player would allow the Sixers to stagger their best players some more, with one or more of their top guys able to run with bench units and attack less talented backups on opponents.

(And from a purely comedic perspective, the fanbase that birthed, "Shoot a three, coward" having to pull for Ben Simmons would be rich. Of course, given the way this rivalry has unfolded over time, I can only assume Simmons would turn into Larry Bird as a shooter after being shipped to Boston because that's the natural order of things.)

Frankly, the biggest issue is the Celtics simply making Brown available in the first place. Maybe they're a team in need of a reset/refresh given where they sit in the Eastern Conference pecking order, but that feels like it could be accomplished by offloading a guy like Smart for whatever value he fetches rather than trading an ascending star shot creator. Trading guys who routinely show you improvement on the floor every year tends to be bad business, but with Brad Stevens running the front office instead of Danny Ainge, it will be interesting to see what (and who) the new Celtics regime values moving forward.

File this one under unlikely to happen, but put it this way — it's more fun to discuss than the rights Philadelphia has to pursue mental health updates under the collective bargaining agreement.