WATCH: Is it OK to spit on a Nazi? 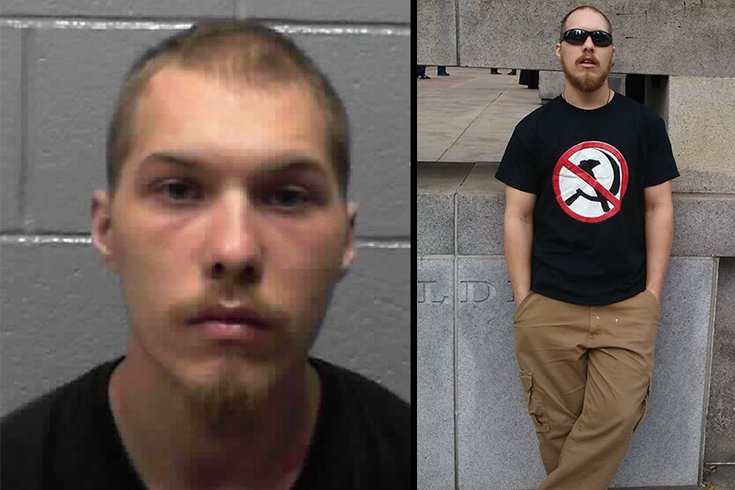 Was the man involved in a Rittenhouse Square scuffle on Saturday, November 4, 2017 (right) the same man who crashed a vehicle loaded with drugs, explosives and chickens in West Virginia more than three years ago?

It’s the type of situation where nobody appears to be in the right.

When Saturday’s protest against “the Trump/Pence regime” made its way from Thomas Paine Plaza to Rittenhouse Square around 3:30 p.m., tensions ramped up from an already high level.

At least that’s the sense one would get from watching a two-hour-plus video taken of the protests at both locations.

Should you fast-forward to the one-hour 26-minute mark of the video, you’ll see a protester calling out an attendee who she’s deemed to be a “white supremacist.”

He denied that label before declaring that “Andrew Breitbart was a great man.”

“F*** Donald Trump and the people who voted for him,” she then chanted.

Attention then turns to some “naked dudes over there” off camera who might be “trolling” but are definitely “freezing” in the colder temperatures.

Within seconds, that moment of calm interaction would disappear.

Another man, wearing a black T-shirt emblazoned with an anti-communist insignia, then got caught up in a verbal, and then physical, altercation with two women.

Several minutes earlier, he’d engaged in a discussion with other protesters about DNA and ethnic lineages, and got taunted by lookers-on.

Now, he was dealing with the fact that a woman jumped right in front of him and swiped his sunglasses off his head. Frustrated, he turns around asking for police intervention. Someone quickly handed his shades back to him.

“White power,” he said as a female friend of the woman escorts her away from the scene.

They wouldn't get far before insults were flung their way.

“Take your fat ass somewhere else. Have your dyke walk you away," the man said. "You’re lucky. You’re lucky.”

The friend turned around, walked back toward the man and spat in his face. He then appeared to kick her leg as she walked away. The other woman barreled back over and threw a punch. He grabbed onto her. They spun and fell to the ground.

“He hit her! He hit a woman! I saw him hit a woman!” a witness yelled, a statement caught on film by Gutenburg Videos. You can see the full, and edited, versions below:

The crowd turned on the man as he’s surrounded by police officers. An officer is shown cuffing the woman on the ground while people urge police to “lock his ass up” because “he attacked her.”

Though both were seen getting taken into custody,  Officer Troy Brown of the Philadelphia Police Department’s Public Affairs Unit reported Monday morning that there were “no arrests that we were made aware of” at the protests.

News reports from the scene noted that the woman was taken to an ambulance with a potential injury to her hip.

A man with ties to the "One People's Project" – who requested anonymity out of fears of doxxing – told PhillyVoice that he’d spoken with the man earlier in the day.

“As he told me, his name is Seth and he is from Emmaus, Pa.,” he said. “He told me there should be a ‘White Ethnostate’ and more.”

Buoyed by a photo that One People’s Project shared of the man, along with the video footage, Twitter Nation posited that Seth from Emmaus, Pa. is indeed a man from Emmaus named Seth Grim who, in 2014, “wrecked an SUV on a West Virginia highway while carrying live chickens, improvised explosives and guns.”

It's quite the story:

In the back of his Explorer were 35 to 40 chickens along with an AK-47 and a large amount of ammunition.  Also in the back of his vehicle was a device that police were extremely concerned about.  The "improvised explosives" prompted a higher level of response.

The West Virginia State Police Bomb Squad out of Williamson was sent to the scene and removed the device.

Initially, all of the chickens were reported to have made it out alive.  Our reporter, who was on site during the shutdown of the interstate, tells us that some of the chickens died.

Grim was arrested after that crash. He was sentenced to two years in federal prison after pleading guilty to an illegal firearms possession charge. According to Federal Bureau of Prisons records, he was released from custody on May 19, 2016.

It could not be confirmed – beyond striking similarities between the then-and-now photos and videos from this weekend – that it was the same man.

A voicemail message left at the listed phone number for a Seth Grim in Emmaus, Pa. was not returned on Monday.

The public Facebook page for Seth Grim in Emmaus, Pa. features many links critical of Islam, but there are no updates placing him in Philadelphia over the weekend. A private message to that account also went unreturned.

Court records show no record of a Seth Grim being criminally charged in Philadelphia this weekend, as well.

So, onto the question at hand: Is it OK to spit on someone who yells "White Power" and who you deem to be a Nazi?

Whether your ideological nemesis has, or has not, crashed a car loaded with chickens, weapons and drugs, it’s not socially acceptable to spit in their face and then blame them for reacting in a not-so-positive fashion.

Sure, he could've been the bigger man and walked away. Still, the fight found him after he'd drawn a verbal line in the sand.

I know, I know: There are valid pro- and con- arguments involved in the “Is it OK to punch a Nazi” debate. The same applies here.

Yes, it's wrong to fling homophobic insults at them as they're walking away from you.

Yes, it's wrong to scream "White Power" when surrounded by people looking for confirmation that calling you a "Nazi" is proper.

Yes, it's right to react calmly to someone jumping in your face at close range moments before her friend returns to hock a loogie at you.

And finally, yes, it's safe to assume that bodies wouldn't have slammed into the concrete hadn't someone wielded saliva as a weapon.

Far be it from me to defend those who treat a "white ethnostate" as an idyllic place.

Still, I just think it’s ridiculous to screamingly maintain that Mr. White Power was solely responsible for that fracas escalating at Rittenhouse Square on Saturday afternoon as witnesses attested on film.

Nobody should walk away from that melee thinking they seized the moral high ground. Not the man who physically tussled with two women. Not the two women who, respectively, stole his sunglasses and spit in his face. And not the bystanders who egged it on. Nobody.