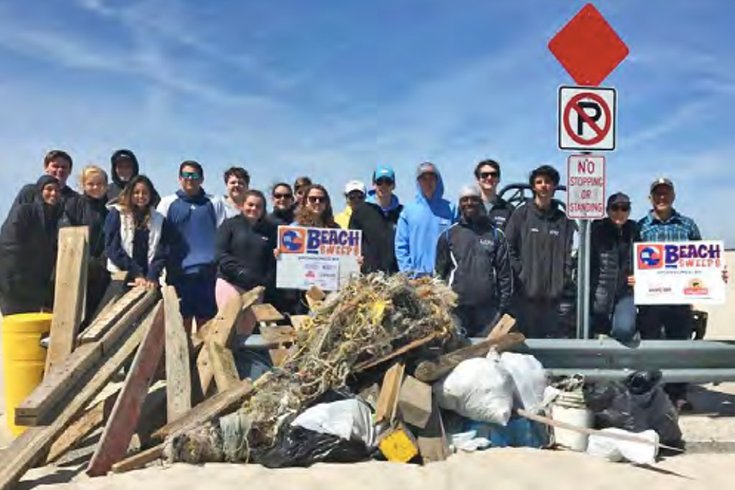 Volunteers pose with a large pile of debris collected after a Beach Sweep in Cape May in April 2018.

People are apparently having a lot more sex on the beach at the Jersey Shore.

And leaving the evidence behind.

Glove-wearing volunteers picked up 565 condoms from New Jersey beaches in 2018, an increase of more than 56 percent from 2017, according to the New York Post.

Nearly 82 percent of the trash collected during beach sweeps conducted by Clean Ocean Action advocacy group last spring and fall was plastic, including bottles and bags. Volunteers picked up about 25 percent less cigarette butts, year over year, but did collect a kitchen sink in the sand.

“The Beach Sweeps provide proof we humans can be a wasteful, sloppy, and pretty gross bunch,” said Cindy Zipf, the group’s executive director, told the Post. “Who leaves diapers on the beach? It’s bad enough that litter makes our beaches look terrible, but it also kills and maims marine life. The good news is that the beach sweeps also proves we have great capacity to respond to environmental harm.”

According to the Post, some of the items collected were unusual, including a Philadelphia rail token that appeared to be from the 1930s, a fake $100 bill and a sex toy. Some medical waste was also found, though not at late 1980s-levels, when it became an epidemic on Jersey beaches.

Since 1985, the group’s volunteers have removed nearly 7 million items of trash from 60 New Jersey beaches, including those in Long Beach Island, Atlantic City, Ocean City, Sea Isle City and Wildwood.