The Sixers' star has big questions to answer this summer: Will he stay? And will he make more cookies? 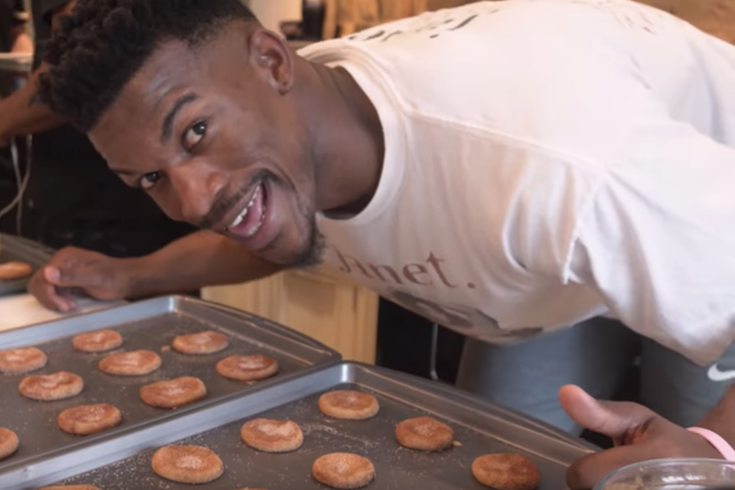 The Sixers aren't sure whether Jimmy Butler will return to the team next season. They do know, now, that he makes a mean snickerdoodle.

The NBA still has three teams standing, battling it out for a championship as the postseason reaches its absolute peak. For fans of the other 27 teams, this time of year represents a chance to get a head start on building a winner ahead of next season.

MORE: The Sixers should not take Tobias Harris' free agency plans for granted

The Sixers, for instance, need to figure out if they can convince Jimmy Butler to stay in Philadelphia for the long term. This is often when fans start dissecting every bit of social media detritus to try and see what players’ plans might be. Let’s check in on Butler, shall we?

Oh? What’s that? It looks like the team’s 29-year-old star is… baking snickerdoodles?

If you follow Butler on Instagram, you know he loves to hang out in his house with his friends, and a lot of that time is spent in the kitchen. Still, Butler choosing to make cookies for his father and his cousin on their respective birthdays, when he has millions of dollars and could just buy some cookies — like, maybe, snickerdoodles from the Pennsylvania General Store at Reading Terminal Market — is pretty cool.

At one point, Butler demonstrates some solid hand mixer skills. He then “guesstimates” how much baking soda the cookies will need, and also compares combining dry ingredients to “a woman: you can’t rush into it.” Things are sort of all over the place.

2. Mix together 3/4 cup of softened butter, 3/4 cup of shortening, 1 1/2 cups sugar, two eggs, and 2 teaspoons of vanilla extract. Blend in 3 cups all-purpose flour, a “small amount” of cream of tartar, 1 teaspoon of baking soda, and “barely any” salt. Shape dough by rounded spoonfuls into balls.

4. Bake 8 to 10 minutes, or until set but not too hard. Remove immediately from baking sheets.

Buckle in, Sixers fans. It’s going to be a weird offseason.