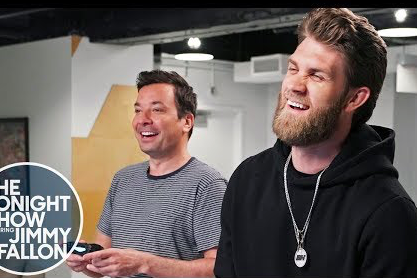 As the Philadelphia Phillies look to get into a groove this season, the excitement surrounding the arrival of Bryce Harper is still palpable.

Before the Phillies signed Harper, fan frenzy was so great that there was even some speculation the star free agent would make an announcement via his endorsement with "MLB The Show," a video game whose cover he'd been slated to grace for months.

That never happened, but Harper is still on the game's 2019 cover in a Phillies jersey, so all's well that ends well.

In a special segment on "The Tonight Show Starring Jimmy Fallon," the NBC host challenged Harper to a home run derby in the video game. Harper got to be Harper, of course, and Fallon chose New York Yankees' slugger Aaron Judge.

You would like to believe that baseball skills translate back to the video game console, but is that really the case? Let's just say Harper is the kind of guy who will slap your controller out of your hands.