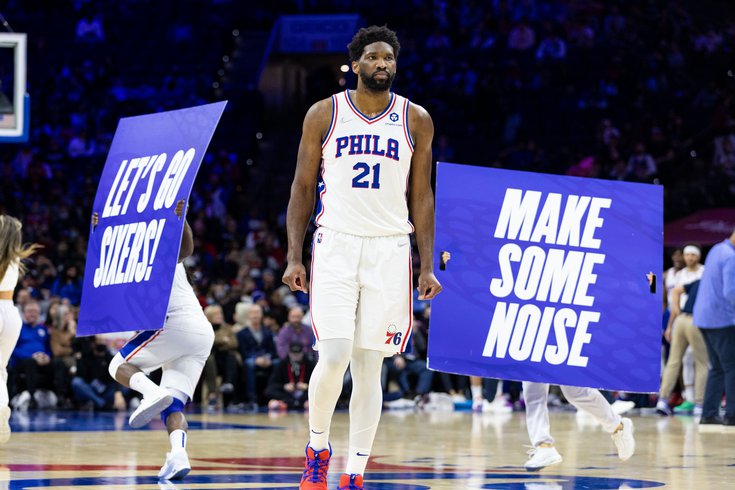 Joel Embiid might be the best basketball player on the planet right now.

As recently as two seasons ago, a mid-January game against the Orlando Magic would have been high up the list of eye-roll experiences in the Sixers' world. Even at this moment, with Joel Embiid in the form of his life, it was not exactly a schedule-clearing event leading into Wednesday's matchup, the sort of game you just try to get through unscathed while hopefully gaining one in the win column.

But Embiid made sure everyone watching and attending Wednesday's game will remember his performance for a long time, pouring in 50 points, 12 rebounds, and two assists in just over 27 minutes of action. Since the start of the shot-clock era in 1954, it is the fewest amount of minutes any player has needed for a 50-point, 10-rebound game, with Embiid joining Allen Iverson and Wilt Chamberlain as the only players to notch multiple 50-point games for the Sixers franchise.

"I was okay," Embiid deadpanned after the game.

It is, at least to this point, the high bar during a run that has reinvigorated discussion of Embiid as an MVP candidate, a season removed from a runner-up performance for the league's top individual honor. For a while, the dream of winning that award looked dead for Embiid, at least this season. The Sixers spiraled after starting the season 8-2, Embiid out of action due to COVID while they went on a hellish road trip throughout the month of November, and the Sixers looked more likely to be a play-in team than a certified threat. All Embiid has done since is play well enough for local and national observers to treat holding onto Ben Simmons past the deadline as a war crime, a potential act of terror from a franchise that has one of the best athletes walking the Earth right now.

That early-season absence, weirdly enough, may be exactly what is fueling this run of dominance. Embiid said as much on Wednesday night, noting the "blessing in disguise" he received when he was able to rest up (while also dealing with COVID symptoms) and deal with an aching knee instead of trying to carry the Sixers on a bum leg.

"I got hurt in the first game, [Jonas] Valanciunas kneed me right in the knee. I really couldn't jump. To be able to make jump shots, you need to be explosive and you need to jump, and I really couldn't move the way I wanted to on the court," Embiid said Wednesday. "That was really the main reason why I started slow, that happened to be the first game and the first five minutes of the season. Obviously, the COVID break helped out a lot, a blessing in disguise looking back at it, to be able to kind of rest the knee and take as much time as I could."

You would hardly know health issues were in the recent past for Embiid while watching him go to work these days. Embiid is moving and playing at a different pace than he has in the past, flying down the floor in an effort to exploit early openings and put opponents in compromising situations. He has always had a significant physical advantage vs. most of the players guarding him, but he is making teams feel that more frequently and from more spots on the floor than he used to. Even when he is canning midrange shots, he is leveraging his physical strength more — when he's not baiting a defender who reaches for the ball, he's putting his shoulder into somebody's chest, creating the air space to get off a lightly-contested jumper.

Embiid has made no secret of his quest to chase and sustain greatness over the last two years. As he reiterated after his dominant effort on Wednesday, the (admittedly brief) offseason following their first-round exit in the bubble was a time of reflection for Embiid, who became a father and watched as he fell out of All-NBA discussion entirely. Fueled by that slight — and wanting to set a high bar for his newborn son — Embiid doubled his efforts with trainer Drew Hanlen and created Team Embiid around him, consulting with a nutritionist and other specialists who have helped him become the best version of himself.

Dating back to Embiid's humble basketball origins, one of the things observers have noted along the way is his ability to retain information and absorb teaching in a short period of time. Coaches from his past frequently noted his ability to see something on tape, work on the move, and almost immediately put what he'd learned to practical use. He has gifts that go far beyond his size and strength, and he has reflected on the importance of using them as adversity has hit him in the NBA.

"I was extremely disrespected," is how he chooses to frame his standing in the league following the 2019-20 season. "I also saw it as an opportunity to kind of actually make use of the talent that I have."

The talent portion has never been in question. Comparisons to Hakeem Olajuwon date back to his days at Kansas, both because Bill Self invited them and because Embiid pulled off an in-game Dream Shake that would make the Houston legend proud. Brett Brown used to call him "Shaq with soccer feet," a nod to his bulldozer power and the Madridista's love for the beautiful game. His current coach mentions Kevin Garnett, a two-way force who ranks as one of the all-time greats despite spending much of his career in midwest obscurity. More recently, Embiid has name-checked the legendary players he's trying to borrow from, ranging from Dirk Nowitzki's iconic one-legged fadeaway to the mid-post arsenal championed by Michael Jordan and Kobe Bryant.

At times, leaning toward the last two men in that list has led Embiid into trouble. It is one thing to say you can play like a guard and another to live like one. No one can doubt the work Embiid put in to rise from obscurity to professional greatness, but refusing to cede that he has limitations is what led to some of his worst games, turnover-laden affairs with Embiid missing jumper after jumper to the chagrin of every Philadelphia-area hooper over the age of 50. But it finally seems like he is getting the last laugh — Embiid has not just flashed the guard skills in a halfcourt setting, he has fashioned himself into a transition threat, a fast-break leader on a team missing fast-break dynamo Ben Simmons.

The people alongside him, for better or for worse, sometimes sound less like co-pilots and more like fans, something that's certainly more excusable in the case of a young guy like Tyrese Maxey. A second-year guard getting to start alongside a player like this is an opportunity few players his age are afforded, and the act of comparing Embiid to all-time greats is something even Maxey says he likes to do sometimes.

"I was a fan," Maxey said of the experience after the game. "It was amazing to watch. I was messing with him before the game about who was he going to be tonight, Shaq, Dirk, you know, because he can do everything. He was like, 'I'm gonna be Joel.' So I said okay, you go be Joel then. And that's what he did."

Jokes aside, Philadelphia's brain trust can't afford to have the same reverence as a 21-year-old kid having the time of his life next to Embiid. Several front office structures removed from the group who brought Embiid to Philadelphia — even if this version has connections to long-departed GM Sam Hinkie — the Embiid we see today is the culmination of a vision this franchise had eight years ago, betting on a kid who was the second-biggest name in his college team's recruiting class. There were an unbelievable amount of hurdles between fresh-faced Embiid and this level of greatness, starting with his own body, which appeared to doom him from starting a career in the first place.

Now that he's here and in the midst of a run that has had him rubbing elbows with the likes of Chamberlain, the pressure is on everybody else. Wednesday's first half highlighted the gap between Embiid and everyone else on the roster, the lack of a true running mate who might help him be the championship-winning star he believes he can be. Embiid managed to play the Magic to a 20-20 standstill before checking out of the game for the first time on Wednesday, the rest of his teammates offering just two points on 1-for-9 otherwise, drawing ugly and indiscriminate Sharpie lines over another watercolor masterpiece.

If the urgency of the moment is getting to him, if he believes the team needs to get something done ASAP, if he thinks an apex year in his prime is on the verge of being wasted, his poker face has improved enough to hide those thoughts. Everywhere you look, you see only the investment in himself, this team, and the guys around him, no more and no less. There are in-game chats with Maxey when Embiid thinks he passed up a shot opportunity, frustrated gestures when a defensive assignment is missed, and the trademark gestures to the crowd, running with the showman torch Iverson capably wielded for all those years at the Wells Fargo Center. For 48 minutes every other night, unrealistic as a title shot looks for this group, the only thing that matters to Embiid is bringing the group he has closer to outlasting all of the rest.

"I'm trying to play at the best level possible that I can," Embiid said Wednesday, "and that's being the best player in the world. And for us to win, I have to be that guy every single night."

For about a month-and-a-half straight, Embiid has been that guy. And if his history of one-upping his own exploits is any indication, perhaps it's not unreasonable to say the best is yet to come.