John Street: Enough with the 'loser talk,' Trump's president because of voter turnout 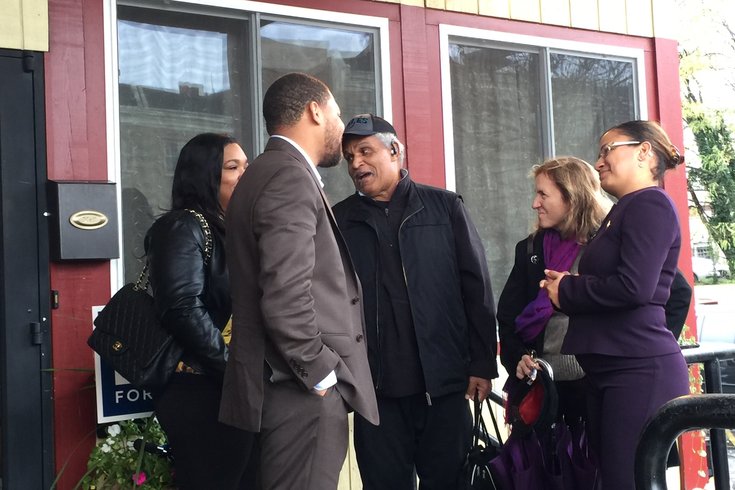 Former Philadelphia Mayor John Street (center) doesn't blame the Electoral College, Russian collusion or James Comey for Donald Trump's victory in 2016. Instead, it was a failure to turn out the vote.

With a resume that boasts of 18 years as a city councilman, another six as council president and a subsequent eight as mayor, John F. Street knows quite a bit about Philadelphia politics.

On Tuesday afternoon, the 75-year-old North Philadelphian shared some thoughts about an Election Day which sees Americans using their ballots to either condemn or celebrate the one two years ago that unexpectedly carried Donald Trump to the White House.

Standing outside Relish restaurant in West Oak Lane moments after Gov. Tom Wolf hopped in an SUV to return to the campaign trail, Street was dismissive of countless “excuses” being bandied about. He focused instead on the importance of getting people to actually vote.

He started off by saying that Tuesday’s election was much more of a national event than a hyperlocal one, though area voters were using it to send a message to Washington, D.C. He chalked that up to the “silver lining of the Trump presidency being a wake-up call.”

“I blame us for him getting elected in the first place,” he said, noting that not enough money was put into Election Day get-out-the-vote efforts here and across the commonwealth. “About 80,000 votes in three states cost Democrats the presidency.”

"I don’t know one person in North Philly who said they didn’t vote for Hillary because of the emails. There were no Russians outside the polls." – John Street

While Hillary Clinton drew some 475,000 more votes than Trump in Philadelphia in 2016, the latter won the commonwealth (by a shade under 45,000 votes) and its 20 Electoral College votes.

Street maintained that gap would’ve been easy to cover with better funding of GOTV efforts instead of being earmarked for Clinton and Katie McGinty’s U.S. Senate campaign against incumbent Pat Toomey.

“It was a logistics failure,” he said. “I’m tired of the excuses. I don’t know one person in North Philly who said they didn’t vote for Hillary because of the emails. There were no Russians outside the polls. It’s not about the Electoral College being unfair, or Russians, or James Comey, or the FBI.

“We keep making excuses about other forces, but I call that ‘loser talk.’ I don’t want to hear that loser talk anymore. It was our failure. We failed to get people to the polls and we lost.”

Street said he sees a change afoot, though, in the face of “Brat” Cavanaugh. The contentious new Supreme Court Justice – real name Brett, though Street referred to him by the other name – “was a gift to the Democratic Party with women across the country just hating him.” (He was a totem for many things that Trump has done to the disagreement of many Americans.)

That Trump didn’t offer up another nominee who was less controversial will fuel the Democratic opposition, specifically on an Election Day like Tuesday where voter turnout is said to be approaching presidential election-year numbers instead of generally lower mid-term totals.

“We’ve learned that the president can do a lot of damage and motivate angry people to come out of nowhere,” he said, alluding to recent instances of domestic terrorism. “Our job is to take advantage of that situation. It’s all been a huge wake-up call.”