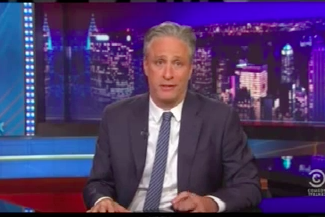 The Daily Show host Jon Stewart took a detour from his typical comedic spin on national news Thursday to deliver a powerful, sombering monologue on the tragic mass shooting at the Emanuel AME Church in Charleston, South Carolina.

"What blows my mind is the disparity of response between when we think that people that are foreign are going to kill us and us killing ourselves," Stewart said of the mass shooting Wednesday that killed nine, including a native of Newark, New Jersey.

He went on to share his prediction on America's response to the shooting: "We still won't do jack shit."

"Nine people were shot in a black church by a white guy who hated them, who wanted to start some sort of civil war. The Confederate flag flies over South Carolina and the roads are named after Confederate generals and the white guy is the one who feels like his country is being taken away from him."