For the first time, the awards will take place at Prudential Center in Newark on Monday at 8 p.m. 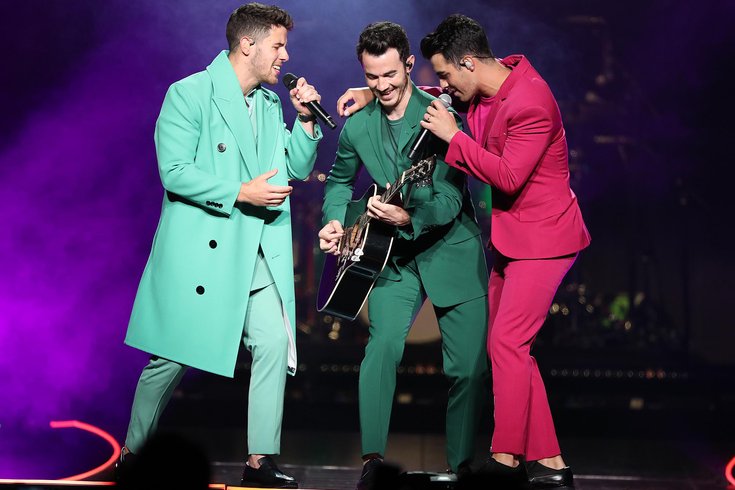 The Jonas Brothers performed in Asbury Park on Sunday to pre-record a segment that will air during the MTV Video Music Awards, which begin at 8 p.m. Monday, Aug. 26, 2019. Above, the band is shown during a concert at the Amway Center in Orlando on Aug. 9, 2019.

The Jonas Brothers returned to their old stomping grounds to film a segment for MTV's Video Music Awards.

New Jersey natives Nick, Kevin, and Joe Jonas performed their single "Sucker" at The Stone Pony bar on Sunday before taking to a stage on the boardwalk in Asbury Park to record a segment for the awards show.

The segment will air during the VMAs, which will take place at the Prudential Center in Newark, for the first time ever, on Monday at 8 p.m.

The brothers gave a small free concert after the segment was filmed to the thousands who had gathered there, too. According to the Asbury Park Press, there were around 8,000 in the crowd.

First look at the @jonasbrothers stage on the Asbury Park boardwalk, playing there tonight. Gonna be a scene. pic.twitter.com/kZLYjvgPrZ

Asbury was turnt up for the #vma #jonasbrothers hopefully your boy makes a tv debut be sure to watch tomorrow 🎥💯🔥🙌 @jonasbrothers @vmas #JonasBrothersToronto #asburypark pic.twitter.com/m1mrSnxJi9

I got to see a mini Jonas Brothers concert while at Asbury Park yesterday! I honestly didn't even know they had gotten back together until then... pic.twitter.com/eSNQx5iLB1

Omg I can’t believe last night happened!! 2 friends and I spontaneously drove to Asbury Park here in Jersey to see the @jonasbrothers pre-record their #VMAs performance 😍

The 3 of us have been huge fans since 2007, literally lived our best lives last night, we got SO CLOSE 😭🙌🏻 pic.twitter.com/oaRF50YPIY

You can stream the awards show via MTV here at 8 p.m., with a pre-show featuring performances and red carpet coverage, starting at 7 p.m.