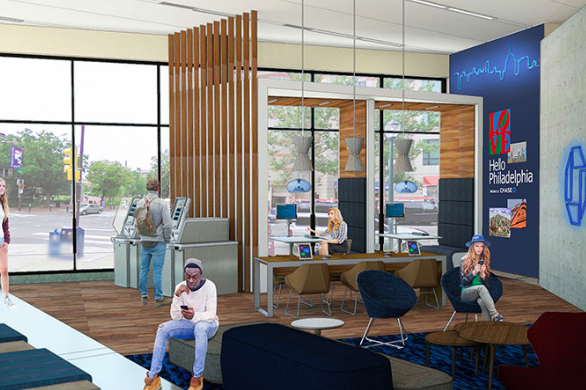 JPMorgan Chase will enter the crowded Philadelphia banking market, promising to open 50 new branches in the region. Above is an artist's rendering showing an example of what a JPMorgan Chase bank location will look like.

The Philadelphia area will soon begin to see a new competitor enter a crowded banking market after JPMorgan Chase announced it will bring 50 new branches to the region.

The largest bank in the U.S. by assets, JPMorgan Chase announced Monday it will open four branches in Philadelphia by the end of 2018.

“The Delaware Valley is an incredibly important market for us,” said Jamie Dimon, the bank's chairman and CEO. “We already have thousands of employees here that serve our customers every day. This will create even more well-paying jobs with healthcare and retirement plans for people in the area, and better serve our existing and new customers.”

Most of JPMorgan Chase's 1 million, Philadelphia-area customers are credit card holders. The company has another 30,000 business clients in the Delaware Valley.

Despite a national trend toward digital banking and fewer brick-and-mortar locations, JPMorgan Chase pledged at the start of the year to open 400 branches in more than a dozen new U.S. markets.

“To us, this expansion is so much more than building a branch. This is about new relationships with customers, communities and employees,” said Thasunda Duckett, CEO of Chase Consumer Banking. “When we build a branch, we lift the whole community around it – contractors to build the branches, cafes and other small businesses to support the customer traffic. It’s a very positive ripple effect.”

The bank will also commit $5 million to support the revitalization of the Kensington Avenue commercial corridor, an underserved area that has been heavily impacted by the opioid epidemic in recent years.

As many as 300 employees will be hired for the Philadelphia area branches with entry-level salaries starting at $16.50/hour.

“We’re proud JPMorgan Chase is not only expanding its business into the Philadelphia region, but also investing in long-term economic solutions for the Kensington neighborhood,” Philadelphia Mayor Jim Kenney said. “Together, we’re creating new jobs and opportunities to put more residents on a pathway to prosperity, revitalize neighborhoods and strengthen our local economy.”