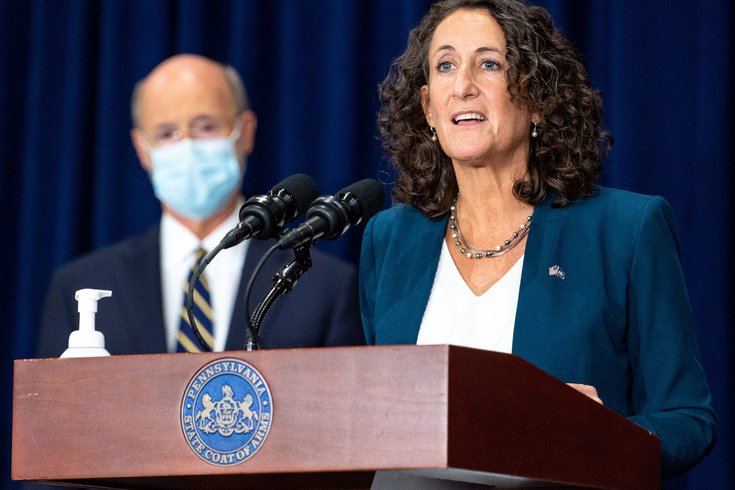 Kathy Boockvar has tendered her resignation as Pennsylvania's secretary of state after acknowledging her department failed to advertises a proposed constitutional amendment.

Kathy Boockvar will step down as Pennsylvania's secretary of state Friday because her department did not publicly advertise a proposed constitutional amendment that would allow child sexual abuse survivors who have aged out of the statute of limitation to sue their abusers over a two-year window.

The department's "heartbreaking" failure will delay thousands of survivors from pursuing lawsuits against their abusers and the institutions that covered them up, Gov. Tom Wolf said Monday.

"I join the Department of State in apologizing to you," Wolf said. "I share your anger and frustration that this happened, and I stand with you in your fight for justice."

The proposed amendment was made in response to the 2018 statewide grand jury report that investigated thousands decades-old child sexual abuse allegations against the Roman Catholic Church, according to Spotlight PA.

Under Pennsylvania law, all changes to the state constitution must be approved by the General Assembly in two consecutive legislative sessions and then pass a statewide ballot referendum. The Wolf administration wanted to have the proposed amendment appear on the upcoming primary ballot.

To do that, the state department was required to advertise the proposed amendments in two newspapers per county during the three months leading up to the 2020 general election. But department staffers discovered last week that the advertisements had not been made, Wolf said.

The amendment, which is supported by the state's community of sexual abuse survivors, was first approved by the General Assembly in November 2019. The state House again approved the measure last month and the Senate was expected to pass it again soon.

Now, this process must start from the beginning unless the General Assembly pursues a statutory change through the standard bill process. Wolf said he is committed to working with lawmakers to reach a legislative resolution.

An amendment now would need to be approved by state lawmakers during the 2021-22 and 2023-24 legislative sessions, meaning the earliest it could appear before voters is in the spring of 2023.

Attorney General Josh Shapiro called the state department's blunder "shameful," adding that "all options must be on the table to fix this immediately."

Too many institutions have failed survivors of sexual abuse for far too long, and I am determined for that disgraceful streak to end and to make sure justice is no longer denied.

Wolf has asked the Office of State Inspector General to review the matter and make recommendations to improve the Department of State's process for handling future constitutional amendments.

To ensure that a similar situation does not occur again, the state department is instituting additional methods to track constitutional amendments, Wolf said.

Wolf thanked Boockvar for her contributions to Pennsylvania.

"Thanks in part to Kathy’s leadership, Pennsylvania voters either cast ballots using modern voting machines or securely voted by mail for the first time," Wolf said. "It is through her commitment to helping the counties administer a fair election that we can all have confidence in the accuracy and integrity of the recent election results."

An attorney by trade, Boockvar previously served as chief counsel at the Department of Auditor General. She also has served on the Delaware River Port Authority's Board of Commissioners and as the executive director of LifeCycle WomanCare, a birth center in Bryn Mawr.

Boockvar has worked as a poll worker and voting rights attorney. The 52-year-old Democrat currently lives in Doylestown, Bucks County.

"I’m extremely proud of what we've accomplished for the people of Pennsylvania," Boockvar said. "I’ve always believed that accountability and leadership must be a cornerstone of public service. While I only became aware of the mistake last week, and immediately took steps to alert the administration to the error, I accept responsibility on behalf of the department."