Pennsylvania National Guard to remain in Washington through mid-March

About 450 members will assist law enforcement agencies with crowd management, traffic control and other duties 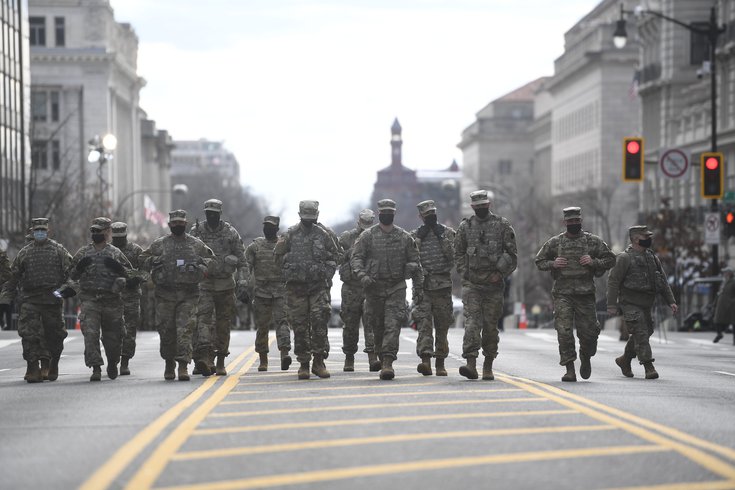 The Pennsylvania National Guard will continue supporting federal and local law enforcement agencies in Washington in the wake of the deadly U.S. Capitol riot earlier this month.

About 450 members will remain through mid-March to assist with crowd management, traffic control, communications, logistics and medical services, the Associated Press reported. At one point, about 2,350 members were in the nation's capitol.

There are currently about 13,000 National Guard members from various states in Washington. About 7,000 will remain over the coming weeks, with the total presence to be pared down to 5,000 by mid-March.

At one point, some 25,000 National Guard members were stationed in the city.

"I'd like to thank our National Guard soldiers and airmen for the hard work, swift response and steadfast dedication," acting U.S. Army Secretary John E. Whitley said. "They're committed to ensuring that our capital remains secure.

"I'm incredibly proud of our airmen and soldiers serving in support of local and federal law enforcement activities," Whitley continued. "This mission shows the breadth, flexibility and resolve of the National Guard and the sacrifice and service that provides to our nation."

Hundreds of pro-Trump supporters stormed the Capitol on Jan. 6 after a rally where President Donald Trump spewed baseless claims of voter fraud. He encouraged the crowd to march up the National Mall to protest the certification of Joe Biden's victory in the 2020 presidential election.

Five people died during the insurrection, and hundreds have since been arrested.

Trump was impeached by the U.S. House of Representatives on claims he incited the violent insurrection. The former president now faces a trial in the U.S. Senate, which could result in him being banned from holding federal office again.