Some 1,500 members will stay through Joe Biden's inauguration 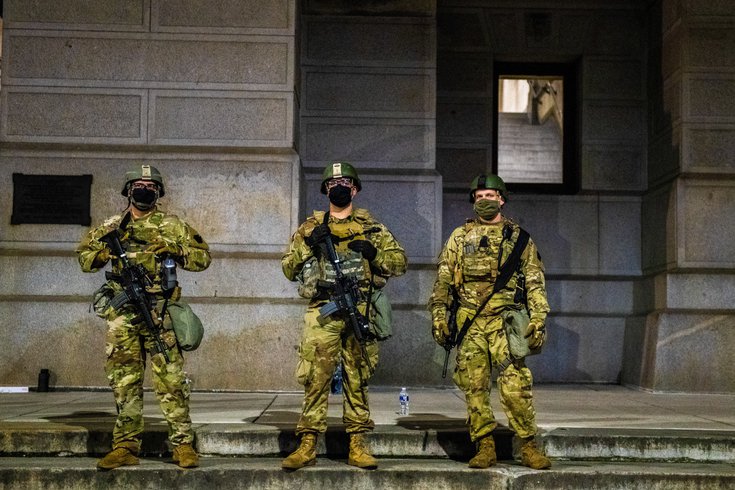 Pennsylvania and New Jersey have deployed National Guard members to Washington D.C. to provide added security in the run up to President-elect Joe Biden's inauguration.

The Guard members will assist with security in the fallout of the U.S. Capitol riot sparked by a pro-Trump mob seeking to disrupt the certification of the Electoral College results.

Pennsylvania Gov. Tom Wolf is sending 1,000 Guard members to assist the D.C. National Guard and local authorities secure the Capitol and other nearby locations. They will remain there through Jan. 20 — Inauguration Day.

"The unprecedented and disturbing events yesterday in our nation's capital are cause for ongoing concern and Pennsylvania is prepared to assist as needed in securing peace and an orderly transfer of power on Jan. 20," Wolf said in a statement.

New Jersey is sending 500 Guard members. They will begin arriving Friday and remain at least through the inauguration.

At the request of the @USNationalGuard, I’m authorizing the deployment of 500 members of the @NJNationalGuard to Washington, D.C. to protect our democracy and facilitate the peaceful transition of power.

May God Bless America and our men and women in uniform. pic.twitter.com/CvAsHIAWCb

Gov. Phil Murphy said about 75 state troopers also were sent to Washington on Wednesday after a conversation with Mayor Muriel Bowser. The troopers were stationed around the Capitol building from 1 to 5 a.m. Thursday and again at 2 p.m.

Murphy called rioters who invaded the Capitol "an unhinged mob" in pointed remarks given Thursday morning. He called for them to be prosecuted to the fullest extent for "desecrating the cradle of American democracy."

It was an "act of domestic terrorism spurred by the President and his minions," Murphy added, saying "the scene that unfolded yesterday in the Capitol building will go down as one of the darkest days in our nation's history."

Murphy blamed President Donald Trump for inspiring the harrowing events that unfolded. The intruders forced U.S. lawmakers and Vice President Mike Pence to evacuate and prompted an armed standoff at the House chamber. They broke windows and trashed lawmakers' offices.

Four people died during the insurrection, including a Ben Philips, a 50-year-old Pennsylvania man and ardent Trump supporter who died of a medical emergency.

Ashli Babbit, a 35-year-old Air Force veteran from San Diego, California, was fatally shot by a Capitol Police officer while a mob headed toward the House chamber, where lawmakers were sheltering in place.

More than 60 people were arrested. The FBI has launched an investigation aimed at identifying instigators, creating an online form where people can submit tips.

Wolf called out Sen. Josh Hawley, of Missouri, and Rep. Scott Perry, of Central Pennsylvania, for spewing disinformation about the integrity of Pennsylvania's election.

"Yesterday, we saw the horrific results of four years of lies and disinformation," Wolf tweeted. "Yet Sen. Hawley, Rep. Perry, and other Republicans still continued to lie about Pennsylvania's election. You can't change the facts. PA had a fair and secure election."

This was the direct result of a deliberate disinformation campaign by Republicans from the President down to legislators in Pennsylvania.