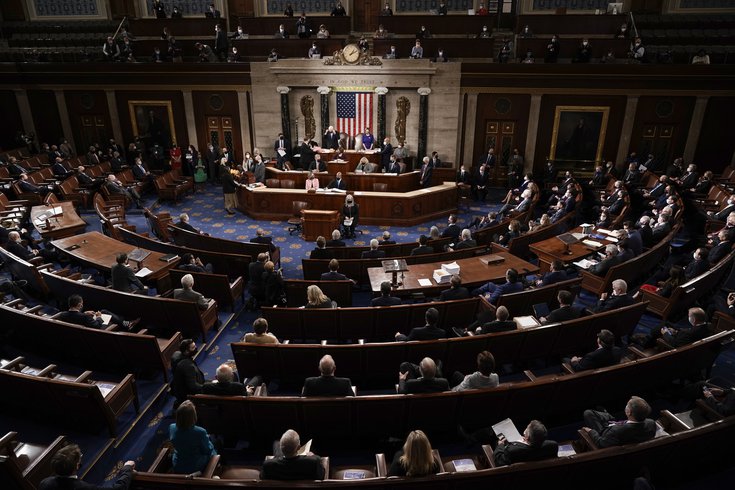 Congress certified the Electoral College votes early Thursday morning, confirming Joe Biden as the next president of the United States.

Lawmakers returned to the Capitol to complete the tally, sending a message that American democracy would prevail, the Associated Press reported.

Lawmakers worked through the night, with Vice President Mike Pence announcing the final tally, 306-232, before dawn.

Trump released a statement saying there will be an "orderly transition on January 20."

"Even though I totally disagree with the outcome of the election, and the facts bear me out, nevertheless there will be an orderly transition on January 20th," Trump said in a statement posted to Twitter by his social media director.

Twitter locked Trump's personal account after he again posted messages that contained false claims about the election and referred to those storming the Capitol as "very special" people. Twitter removed several posts "due to a risk of violence."

"While this represents the end of the greatest first term in presidential history, it's only the beginning of our fight to Make America Great Again!" Trump's statement continued.

Congress voted down a Republican challenge to Pennsylvania's electoral votes. The debate, which lasted two hours, was spearheaded by Rep. Scott Perry, of Central Pennsylvania, and Sen. Josh Hawley, of Missouri.

Biden won Pennsylvania by more than 80,000 votes. Trump and his supporters filed lawsuits and spread false claims that many of the state's mail-in ballots were illegal.

Moments after Congress certified the results, Senate Chaplain Barry Black led a prayer that condemned the actions taken by rioters and reminded lawmakers of the weight of their words, CNN reported.

"We deplore the desecration of the United States Capitol Building, the shedding of innocent blood, the loss of life, and the quagmire of dysfunction that threaten our democracy," he said. "These tragedies have reminded us that words matter and that the power of life and death is in the tongue."

Videos from Wednesday afternoon painted a chaotic picture at the Capitol, showing the pro-Trump mob toppling barricades, scaling the building and smashing windows. One woman died amid the chaos.

Lawmakers crouched under desks and scrambled to put on gas masks as police barricaded the buildings. Rioters vandalized offices, looted artwork and briefly took control of the Senate chambers.

Pennsylvania Congresswoman Susan Wild, of Lehigh County, was among the last lawmakers to evacuate the House gallery. An initial attempt to evacuate was interrupted by the presence of intruders in the hallway.

"All of a sudden, they wouldn't let us evacuate anymore," Wild told CBS News. "They barricaded the doors and said there were intruders again in the hallway. The next thing I knew there was glass breaking and shots being fired and we were told to get down."

The dramatic scene shook the nation and its elected representatives. In a televised speech, Biden said, "Our democracy is under unprecedented assault, unlike anything we've seen in modern times."