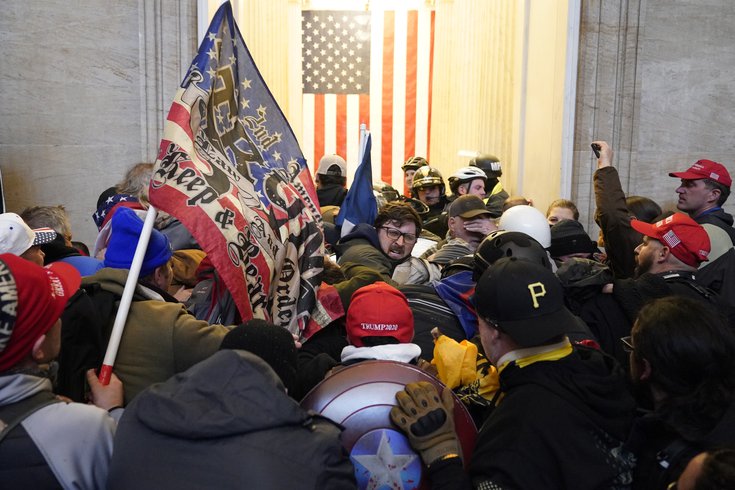 A pro-Trump mob storms the Capitol in Washington, D.C., during Wednesday's joint session of Congress where leaders had assembled to certify Joe Biden as President-elect. The breach prompted lawmakers to evacuate the building.

Congresswoman Susan Wild was attempting to evacuate the House gallery on Wednesday when Capitol police barricaded the doors in response to intruders seeking to disrupt the certification of the Electoral College results.

Moments later, she heard glass breaking and shots being fired. She was ordered to get down.

Wild, a Democrat who represents Pennsylvania's 7th District, covering Lehigh and Northampton counties and part of Monroe County, described the harrowing experience in a phone interview with CBS News on Wednesday evening. The insurrection marked the first time the Capitol had been breached since the British burned the building in August 1814.

We will certify this election.
We will fulfill our duty to this country. We will not be intimidated by the actions of these terrorists. https://t.co/a553kIKgRd

"It's possibly the most frightening thing that I've ever gone through in my lifetime," Wild said. "It was a day that will last in our memories for a very long time. I'm deeply afraid for what it means for the future of our democracy."

A mob of Trump supporters breached the Capitol following a rally in Washington, where President Donald Trump again falsely claimed he won the presidential election and urged the crowd to "fight like hell." The mob broke through a security perimeter and entered the building, prompting the evacuation of the House floor.

At the time, Wild was seated in the House gallery listening to objections to Arizona's election results. The Pennsylvania objections were expected to be heard next and Wild was planning to speak. That's when chaos ensued.

"There was commotion out in the hallway, outside of the gallery," Wild said. "The Capitol Police came in and started locking us in, barricading the doors. Obviously, that was a very frightening, intense situation. The Speaker of the House and a few others in leadership were removed from the House floor."

The remaining lawmakers were instructed to grab gas masks from under their chairs and to sit quietly, Wild said. A photographer snapped a picture of Rep. Jason Crow, a Democrat from Colorado, comforting Wild as they took cover.

This photo breaks my heart.

Eventually, they were told to evacuate the House floor through a single door on the other side of the room, Wild said. She was among the last 15 to 20 lawmakers waiting to get out.

"All of a sudden, they wouldn't let us evacuate anymore," Wild said. "They barricaded the doors and said there were intruders again in the hallway. The next thing I knew there was glass breaking and shots being fired and we were told to get down.

"I don't know how long that lasted. I honestly don't remember. At some point, they were able to secure the hallway again, and we were able to evacuate."

The rioters overtook the building, breaking onto the Senate floor and into lawmakers' offices. One woman was fatally shot and several police officers were injured during the chaos. Tear gas was deployed, but it's unclear whether police or rioters used it.

Wild, of Lehigh County, was elected to the U.S. House in November 2018, filling the seat vacated by longtime Republican Charlie Dent. Then in November, she won reelection.