Birdwatchers, photographers turn out for sighting in Cumberland County 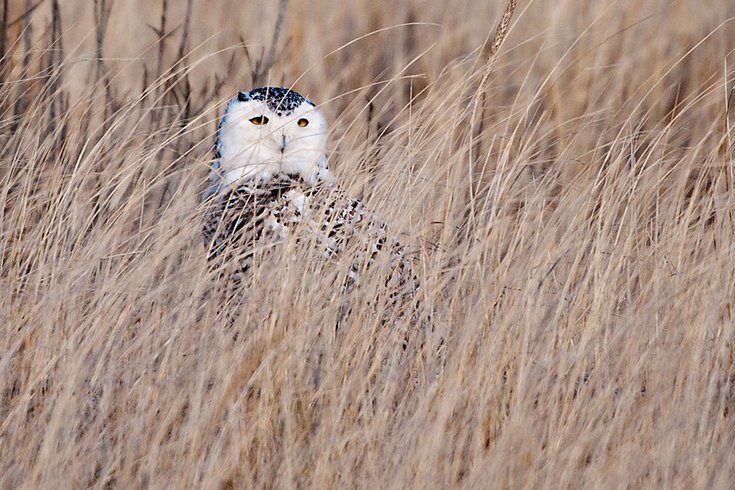 Snowy owls are a relatively uncommon sight in Pennsylvania, but they do make appearances from time to time during the winter. The snowy owl seen above was photographed at Damon Point in Ocean Shores, Washington.

Birdwatchers and photographers were treated to an unusual sight when a snowy owl made a rare appearance in Central Pennsylvania this week.

The majestic white owl, native to the Arctic, often spends winters in Canada and the far northern reaches of the United States. During periods of irruptive population growth, they can venture farther south in the U.S., occasionally making appearances in Pennsylvania.

On Tuesday, a snowy owl was spotted in a field along Trindle Road in Middlesex Township, Cumberland County, drawing a small crowd eager to take in the rare visitor.

Photos of the snowy owl were shared by The Sentinel and PennLive photographer Joe Hermitt.

Snowy owls are the largest owls in North America by weight. They usually find habitats along shore lines of lakes and oceans, as well as on agricultural fields and airport lands.

While not an everyday occurrence, snowy owls have made some memorable appearances in Pennsylvania in the past. On Christmas in 2017, a Pennsylvania Game Warden rescued a snowy owl at the Smithfield State Correctional Institution in Fayette County. The owl was rehabilitated and later released.

On Dec. 25, Wildlife Conservation Officer Amanda Isett safely captured this injured snowy owl at the Smithfield State Correctional Institution so that it could be rehabilitated at Centre Wildlife Care. It is expected to make a full recovery. #wildlifeheroes #snowyowl pic.twitter.com/xRMOweoVFm

Snowy owls in the United States are tracked through a program called Project SNOWstorm, a collaborative based out of the Ned Smith Center for Nature and Art in Millersburg, Pennsylvania. Since the outset of the project in 2013, researchers have tagged more than 70 snowy owls from the Dakotas through New England.