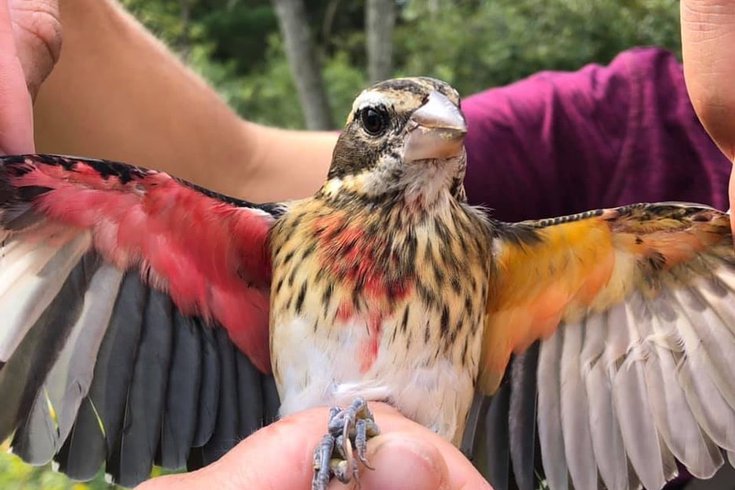 Avian researchers in western Pennsylvania are celebrating the recent discovery of a rose-breasted grosbeak with male and female traits, a rare instance they likened to "seeing a unicorn."

The discovery was made Sept. 24 at the Powdermill Nature Reserve, part of the Carnegie Museum of Natural History's environmental research center in Rector.

Gynandromorphs are organisms that genetically possess both male and female characteristics. Many bird species that meet this definition are called bilateral gynandromorphs, due to the asymmetry of their markings divided by a central line.

The bird found at Powdermill Nature Reserve has the male pink “wing pits,” breast spot and black wing feathers on the right side and the female yellow wing pits and more brown wing on the left side.

In 64 years of banding birds at the nature reserve, avian researchers have recorded fewer than 10 bilateral gynandromorphs.

“The entire banding team was very excited to see such a rarity up close, and are riding the high of this once-in-a-lifetime experience,” said Annie Lindsay, bird banding program manager at Powdermill. “One of them described it as ‘seeing a unicorn’ and another described the adrenaline rush of seeing something so remarkable."

Last year, a pair of birdwatchers in Erie photographed a half-male, half-female cardinal in their backyard.

National Geographic, highlighting the discovery, provided a genetic explanation for how this occurs in birds.

Sex cells’ nuclei, including sperm and eggs, usually have only one copy of either chromosome — males produce only Z-carrying sperm, and females produce either Z- or W-carrying eggs.

Gynandromorphy like that in this cardinal occurs when a female egg cell develops with two nuclei — one with a Z and one with a W — and it’s “double fertilized” by two Z-carrying sperm.

Scientists have debated whether bilateral gynandromorphs have the ability to breed, since only the left ovary is functional in birds.

The rose-breasted grosbeak found at the nature preserve is female on the left side, giving it a theoretical chance of producing offspring if it can successfully mate with a male. Its ability to do so may hinge on whether it sings like a male, which would likely attract females and elicit a territorial response from other males.

With the rare bird banded, Powdermill's Avian Research Center hopes to keep an eye on how its life unfolds.

Lindsay said the research team is eager to learn from this finding.

"They all are incredibly grateful to be part of such a noteworthy and interesting banding record," Lindsay said. "Bilateral gynandromorphism, while very uncommon, is normal and provides an excellent example of a fascinating genetic process that few people ever encounter.”