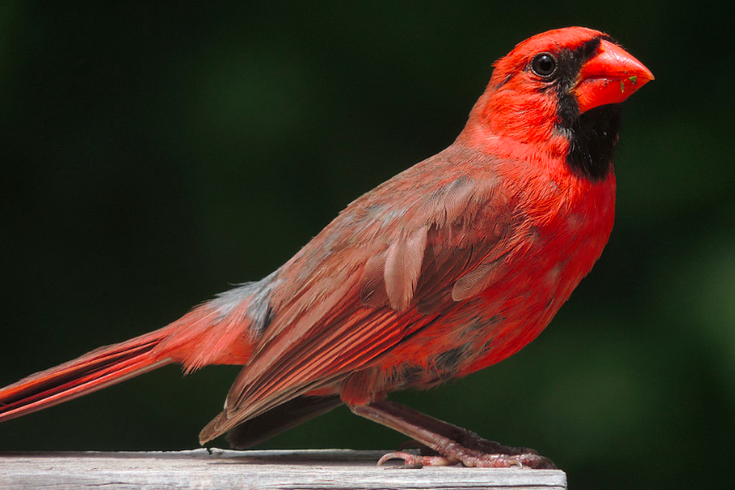 Male cardinals are distinguished by bright red feathers and beaks.

A birdwatching couple in northwestern Pennsylvania has documented one of nature's most rare and elusive occurrences.

Jeffrey and Shirley Caldwell, two experienced birdwatchers based in Erie, lured of a "half-male, half-female" cardinal into their own backyard, National Geographic reported this week.

This might make some peoples heads explode. "...known as a bilateral gynandromorph ... Half its body is male & the other half is female ... a genuine male/female chimera..." https://t.co/HPHgO45YVf #Ornithology #birding #birds #pajeros #oiseaux #GodIsGreat #Science #Biology

Known as bilateral gynandromorphs, birds with both male and female characteristics are typically hard to identify. Cardinals are among the species that display sexual dimorphism, bearing traits that distinguish males and females in sometimes dramatic ways.

A red male and blended female cardinal will typically appear as seen in the photo below.

The genetic explanation behind this phenomenon has to do with the difference in chromosomes for sex determination in birds compared to mammals.

Sex cells’ nuclei, including sperm and eggs, usually have only one copy of either chromosome — males produce only Z-carrying sperm, and females produce either Z- or W-carrying eggs.

Gynandromorphy like that in this cardinal occurs when a female egg cell develops with two nuclei — one with a Z and one with a W — and it’s “double fertilized” by two Z-carrying sperm.

In humans, sexual dimorphism is less pronounced than in other species such as lions, for example, whose adult males have manes. Some evidence supports the theory that sexual dimorphism, in addition to its role in sexual selection, evolved at varying levels to reflect the relative parental investment of males and females of a particular species.

RELATED: The Philly version of Pizza Rat is Pretzel Rat, and here he is

That's not a glowing endorsement of co-parenting in blanket octopi, for example.

An octopus,Tremoctopus violaceus, shows the greatest sexual dimorphism of any animal, female is up to 2m, male comes in at a measly 2.4cm!!

There are countless examples of sexual dimorphism in the animal kingdom, some more widely recognized than others. Male orangutans develop cheek flaps, while female spiders tend to be larger than males.

Other species with bilateral gynandromorphs include butterflies, lobsters, crabs and snakes.

Sadly, for many of these creatures, it's not easy to find a mate. Most are infertile and many are isolated. That doesn't appear to be a problem for the cardinal in Erie. Her female traits are on the left side, which carries the only functional ovary in birds.

The Caldwells have observed that the cardinal is always accompanied by a curious male. They'll be watching for a family if the pair sticks around in their backyard.