Sightings have been on the rise as hibernation season approaches 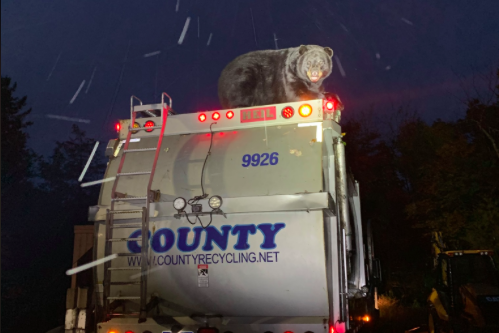 A snarling bear was photographed atop a trash truck in Kidder Township, Pennsylvania.

Bear sightings have become relatively commonplace across large parts of Pennsylvania where the animals once rarely ventured. In recent years, bears have pushed as far south as Philadelphia in search of new food and mates.

But there are still some things you don't see every day.

Earlier this week, authorities in Kidder Township, Carbon County, shared incredible photos of bear that managed to climb on top of a trash truck.

Bear Complaint this morning. He managed to come right to the police station on the garbage truck...

The bear remained atop the truck all the way to the police station, police told WNEP. Crews eventually backed the truck up to a nearby tree, enabling the bear to safely climb down and return to the wild.

"We can only assume it was sick of going for the small, small amount of trash in the garbage pails and went for the big prize," Officer Vincent Murrow said.

Several bear sightings were reported in Delaware County over the summer, while Philadelphia had a memorable bear chase last summer that came to a close in Roxborough.

Katherine Uhler of the Pocono Wildlife Rehabilitation and Education Center told WNEP that bears are especially adventurous this time of year as they prepare for hibernation. They consume about 20,000 calories a day to prepare for their dormant period.

Wildlife experts advise people to put trash out only on garbage day and keep it covered. If you spot a bear, the best course of action is to ignore it.