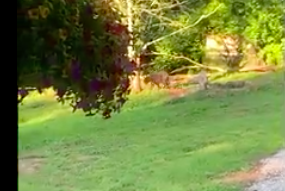 A bear was seen in a backyard in Upper Chichester, Delaware County, on June 9, 2020. Bear populations have increasingly moved into Southeastern Pennsylvania in recent years, leading to several large-scale searches.

Authorities in Upper Chichester are investigating a report of a bear that was spotted Tuesday in a resident's backyard.

Police said the bear was seen at a property in the 4400 block of Garnetmine Road. When officers arrived, the bear was no longer there, but a property owner captured a video that was released by police.

BEAR SIGHTING: The Upper Chichester Police responded to the 4400 block of Garnetmine Road for the report of a bear in the area. It was confirmed by the attached video. The bear was not in the area upon Police arrival. If the bear is sighted please call 911.

Bear populations have increasingly spread into Southeastern Pennsylvania over the last several years as opportunities to find food and mates expand. In recent years, a string of sightings have led to large-scale searches across parts of the region.

In 2016, a black bear seen in Radnor spent several months on the loose before it was eventually corralled and released in Lackawanna County. The search even inspired a Twitter account.

Last June, another black bear first seen in Montgomery County traveled south to Philadelphia and was spotted along the SEPTA tracks of the Manayunk/Norristown Line.

A search that lasted several days resulted in the bear's capture in Roxborough by the Pennsylvania Game Commission. Multiple videos of the young bear's journey through residential areas surfaced during the search.

• Don’t put trash out until the morning of collection

• Clean your outdoor grill, properly dispose of grill grease and bring bird feeders in at night

• Bring pet food in at night

• Don’t place food out for other wildlife (Be aware that intentionally feeding bears is against the law in Pennsylvania.)

Anyone who sees the bear spotted in Delaware County on Tuesday is asked to call 911.