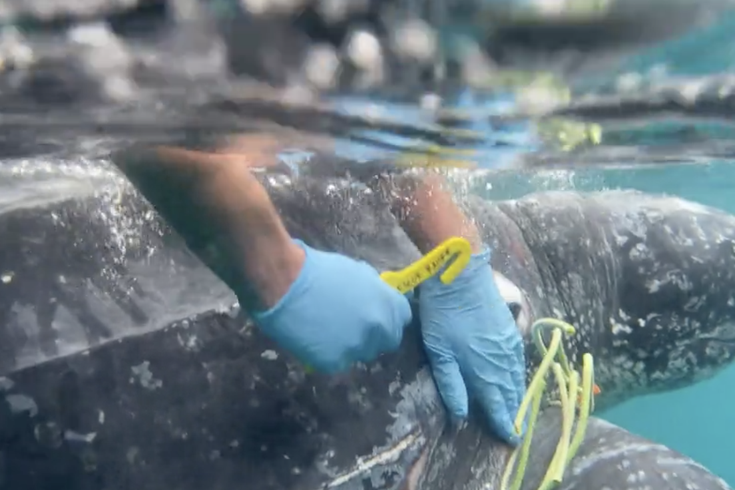 Trapped in a fishing net off the coast of Cape May, with sharks circling nearby, this sea turtle lived to swim another day with the help of the U.S. Coast Guard Sector Delaware Bay.

A sea turtle was saved from impending death on Thursday afternoon when the U.S. Coast Guard received a report that it became entangled in a fishing trap.

To make matters worse, there were sharks circling the turtle about 11 miles off the coast of Cape May, officials said.

The command center for Coast Guard Sector Delaware Bay received the report of the trapped animal from the non-profit Marine Mammal Stranding Center, which is located in Brigantine.

To make the rescue, the 87-foot U.S. Coast Guard Cutter Shearwater was sent to locate the turtle. When the crew noticed the sharks in the vicinity, they boarded a smaller boat and circled around the turtle until the sharks dispersed from the area.

At that point, the crew was able to cut the turtle free and release it. A portion of the rescue can be scene in the video below:

TO THE RESCUE: A U.S. Coast Guard officer helped set a sea turtle free by cutting it from a fishing trap 11 miles southeast of Cape May in New Jersey after spotting sharks swimming nearby.

"This was the proudest day I've had on this cutter," said Master Chief Petty Officer Anthony Martinez, officer in charge of the Shearwater. "Everybody on the crew rallied around and worked together, and we were able to save that turtle."

There are six species of sea turtles that live in U.S. waters, all of which are protected under the Endangered Species Act.

All six species of sea turtles found in U.S. waters are protected under the Endangered Species Act (ESA). The...