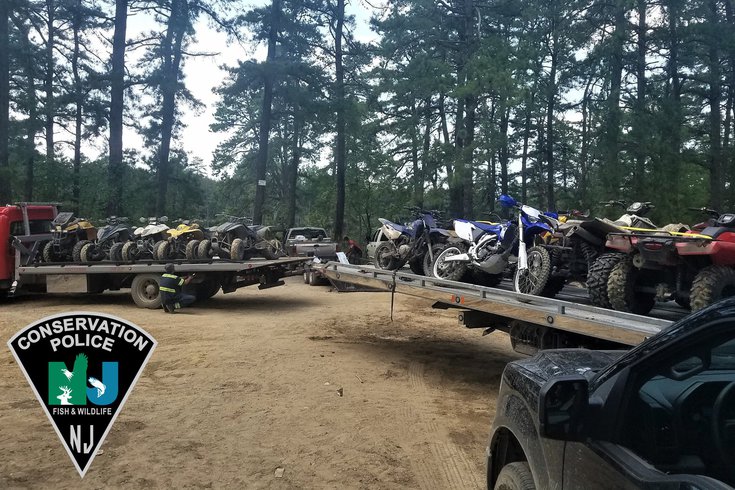 The vehicles were seized as a result of separate investigations on July 25 and July 26 by police with the N.J. Division of Fish and Wildlife. state officials said Friday. Greenwood Forest Wildlife Management Area is located in Ocean and Burlington counties.

The first two ATVs were impound by police who had been patrolling for illegal off-road vehicles in Greenwood Forest on July 25. The operators tried to flee authorities before being caught and issued summonses for criminal obstruction, interference with the duties of a conservation police officer, and violations related to wildlife management area use.

The following day officers found a group of ATV and dirt bike riders from northern New Jersey. Officials said the riders drove past several "NO ATV" signs that were posted in an area referred to as the "clay holes." These abandoned sand mines and quarries fill with water and can become popular places to swim, but they can also be very dangerous.

All these riders were issued summonses for illegally operating off-road vehicles and driving unregistered vehicles in the wildlife area, as well as for illegal swimming, possession of alcohol and entering a restricted area.

Only vehicles that are registered, insured, and considered street-legal are only permitted on established roads and parking lots in wildlife management areas. It is illegal to operate ATVs or dirt bikes in all state parks and forests in New Jersey. The state also requires all off-road vehicles to be registered.

If found guilty, these riders face fines starting at $274 and will be responsible for impound, towing and storage fees of at least $300, officials said.