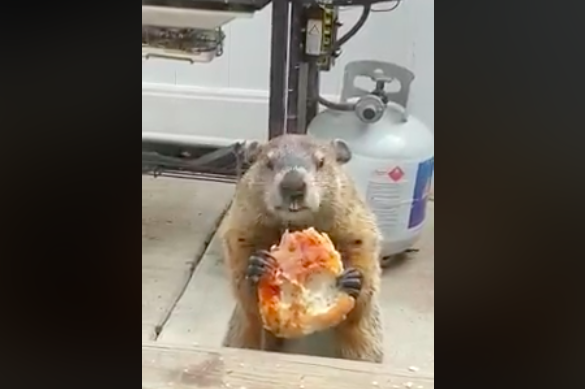 In the strange time of quarantine during the coronavirus pandemic, a Philadelphia woman saw a groundhog outside her home eating a slice of pizza. The video from her Brewerytown home has since gone viral.

Say what you will about the mental toll of stay-at-home life during the coronavirus pandemic, but it's becoming clear that there is some weird activity going on while we're normally out at work. We're talking about animal societies we all should know more about.

On Tuesday morning, Brewerytown resident Kristin Chalela Bagnell witnessed one of the most hilarious animal encounters you'll probably ever see. The video she filmed on her phone is destined for greatness, or at least r/animalsbeingbros or r/animalsbeingjerks.

I've been looking for "your stories" for @6abc for weeks and weeks now and this is paws down the best piece of/PIZZAof video so far. @sarahbloomquist did him justice. Go off, Pizza Groundhog: pic.twitter.com/D7X84sLsUr

Standing outside her patio door, Bagnell observed a groundhog quietly nibbling at a discarded piece of pizza as it gazed into her home, completely unfazed by her two dogs on the other side of the glass. It went on for a while, too.

Bagnell told PhillyVoice there may be more to this story than meets the eye. For one, where did this groundhog procure such a full slice of pizza?

"That is, I think, the funniest part of the story," Bagnell said. "No, it's not our pizza. With Philly being Philly, we have been noticing every once in a while random, half-eaten foods thrown in our back yard. We're not sure if it's our neighbor who we're in the middle of a parking war with or we're just stuck with bad luck."

The groundhog is a known entity on Bagnell's block, among stray cats and other critters contending for disposed food.

"This little guy has been seen around our street," Bagnell said. "In fact, our other friendly neighbor just put some straight potion s*** in our garbage can last week to 'keep the critters out' and now, this week, this guy is in our yard eating leftover pizza."

Bagnell said she first spotted the pizza suspiciously displayed on the top step of her back patio, well before the groundhog arrived. She left it there, annoyed that her rogue neighbor might be playing petty mind games with her. It appeared to be some kind of tactical strike.

"Never a dull moment on this street!" Bagnell said.

Not long after, while on a Zoom call for work, Bagnell noticed one of her dogs staring out the glass door. When she got up to see what was there, she found the groundhog feasting on the pizza.

"This happened for an hour, but not continuously," Bagnell said. "The groundhog did get spooked a couple times and ran under our steps out there. Then a few minutes later, lo and behold, that guy was back on our top step with that slice in both of his hands and our dogs staring him down."

As for Bagnell, the incident lifted her spirit in a time of uncertainty and disrupted routine.

"This made my quarantine absolutely incredible," Bagnell said."I was pissed when I saw the pizza because it was clear someone was messing with us, but now the joke is on them because it made hundreds of people crack up. It also took all the energy out of my dogs. They have been snoring ever since."

It's hard to know for sure whether the pizza was in fact planted, but Bagnell hopes the incident can be a harbinger of peace.

"If this is the product of a friendly parking dispute, we thank you for giving us and hundreds of others the entertainment we need," Bagnell said.