'Chester' gave Highland Park Police the slip, but decided it'd had enough of life on the run 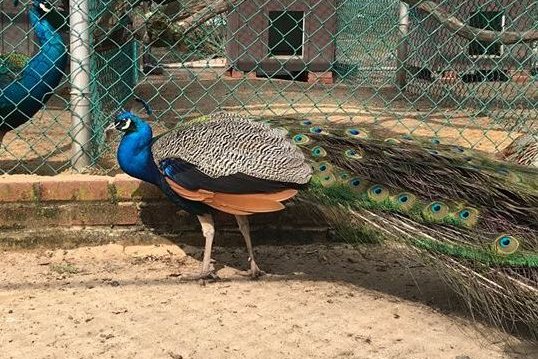 Chester the Peacock led the Highland Park Police Department on a short-lived search before coming home on his own Wednesday.

A peacock escaped from its cage in a park in New Jersey earlier this week and gave police the chase of their lives, only to return home Wednesday of its own accord.

“Chester the Terrible”, as he’s been dubbed by the Highland Park Police Department, escaped from his animal pen in Johnson Park in Middlesex County on Sunday, the police department said when they issued a public call for help:

Police department officials had said its officers unsuccessfully chased Chester down Cedar Lane after he escaped — “Unfortunately," the police officers noted, "we can’t fly, so Chester got the better of us!” — and they asked residents to keep an eye out for the wily bird.

A handful of commenters in the thread posted videos of a peacock, presumably Chester, traipsing through either their front or back yards. But Chester went unchained for about 48 hours, until the police department posted an update at 1:30 p.m. Tuesday afternoon:

"So after some long hard detective work, our friend Chester has returned.

"Unfortunately it was not due to our excellent detectives, or awesome patrol officers.

"Our gallivanting peafowl returned on his own because he missed his friends. a few nights on the lamb apparently made him realize what he was missing!

"Thanks for all of the support in locating our majestic winged friend!"

Now that's a bird in full control of its destiny.

This isn’t the first time a bird in the Pennsylvania-New Jersey area has chosen 2019 to strike out on its own.

In February, an emu led police and local authorities on a weeks-long chase through York County, including breaking out of a would-be captor's headlock and heading for the hills.

The emu's wild ride eventually was brought to a close on Feb. 20 by the Northern York County Regional Police.