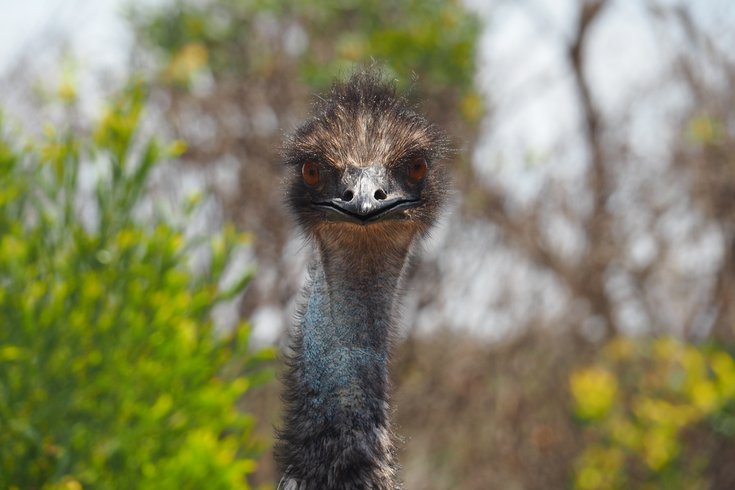 This is an emu. It's not the York County emu, but it's a good emu, nonetheless.

Update, Feb. 28: The uncontainable emu has been contained, according to the Associated Press.

"Northern York County Regional Police say the large bird was caught Tuesday after residents spotted it walking through backyards and on roadways.

Police say animal wranglers with Ellis Animal Services walked the bird to a local emu farm where it has been corralled with other emus."

According to the AP, anyone missing an emu is asked to contact police.

The last time a snowstorm rolled through the Philadelphia area, we brought you the story of the snow camel. This time, with Wednesday’s storm barreling down on Pennsylvania, an emu was running wild in the streets of York County.

An emu the size of a pre-teen child has been spotted flitting about York County, according to the York Daily Record, and even managed to escape a headlock of a potential captor earlier this week.

Police aren’t sure where the emu came from, because they haven’t received any recent reports of missing giant flightless bird in the area. Some neighbors told the Daily Record they believe the bird’s been around the area for a year, which would be quite a feat of survival for the bird.

At one point, police officers and a woman who keeps emus — but isn’t the owner of this emu — managed to grab the bird by its wing and its neck. When they tried to lift the emu into the woman’s pickup truck, the bird wriggled free and fled.

Emus are native to the deserts and grasslands of Australia; they're omnivores; and they can run as fast as 30 mph, according to the Philadelphia Zoo's website.

For reference how difficult it can be to catch one on the loose, here’s a YouTube video of a woman trying to corral an emu:

The bird was last seen near a wooded area off Jug Road, according to the Daily Record. Interestingly, a hunting preserve called “Big R Bird Ranch” is located just off Jug Road — but it specializes in pheasant, chukar, and quail, not emu.

There must be something about winter that brings out the region’s weird animal stories.

About three years ago, a six-foot emu named Eddie was captured in Townsend, Delaware, after running loose for more than two months.