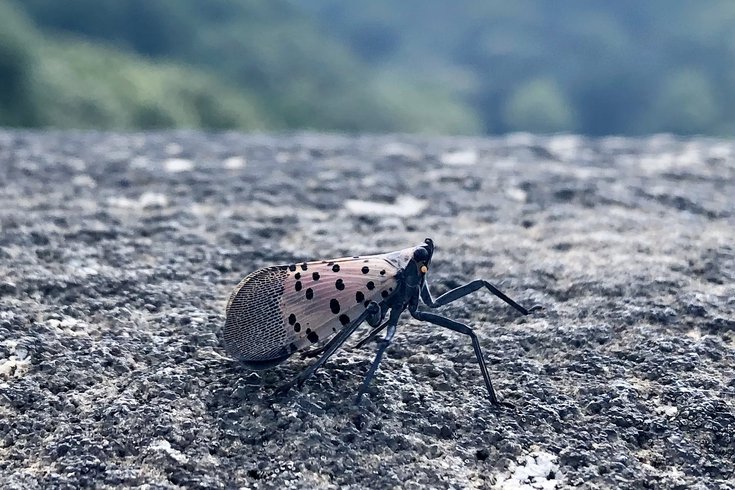 The spotted lanternfly doesn't have natural predators in Pennsylvania, but Penn State entomologist Anne Johnson is examining how toxin sequestration from the tree of heaven — the favorite meal of the invasive pest — may be deterring other insects and birds from eating them.

The war against the spotted lanternfly has spun out of control in 2020, decidedly in favor of the insects. It's not really even close.

We may revel in a skilled assassin unleashing salt gun carnage on a few unwitting pests, but the lanternflies' dominion over Pennsylvania and surrounding states has become dire in the years since they were first observed in 2014.

More than 62,900 public reports of spotted lanternflies have been made in Pennsylvania this year, up 72% from the same period in 2019. Twenty-six counties are under quarantine. They're ripping up vineyards, orchards and terrorizing the state's agriculture industry.

We're seeing ghastly scenes like the one below at university buildings in Philadelphia. It's no bueno out there.

To make matters worse, we're now entering the lanternflies' egg-laying season, meaning it's time to start scraping goop off of trees. The egg masses, each containing up to 50 future lanternflies, will hatch next May. In the meantime, the adults will still be waddling around like they own the place.

At this critical juncture, some hard truths about the future of spotted lanternflies are coming into focus, but it doesn't mean they've won for the long haul.

Anne Johnson is a graduate student in Penn State's Department of Entomology, where she's conducting research on predatory behavior among native species who might prove to be our willing allies. The problem is that most predators don't appear to view spotted lanternflies as a great food source, despite their abundance – possibly because they don't taste very good.

"It seems that a lot of predators, especially our native ones, are avoiding spotted lanternflies," Johnson said. "We think the reason is that lanternflies may be capable of sequestering or storing bitter or toxic compounds (from the plants) that they're feeding on, especially tree of heaven. They can use these compounds as a defense against things that want to eat them."

"It's been going very, very well," Johnson said. "We're getting lots of observations of both wild and domesticated birds. Chickens are a big part of the reports we're getting, but also cardinals and blue birds are being reported as predators."

Notably, many of the reports describe that birds are ripping off the bright red hind wings of lanternflies before making the bugs a meal.

This could be a sign that lanternflies are using toxin sequestration.

"Red will often be used as a warning that potentially this insect contains toxins, but it is also based on the predator's behavior," Johnson said. "They do seem to be getting rid of the wings. It seems like a good possibility that those may be the location where the toxins are stored."

Johnson is working on a chemical analysis of spotted lanternflies to see which compounds they may be storing. If it can be proven and linked to the tree of heaven, that may help inform how to better use natural predators.

"If we remove those toxin-containing host plants, theoretically you may start to see an increase in predation from their natural predators."

In the lab, Johnson's work is simultaneously focused on potential arthropod predators, including spiders, predatory stink bugs and preying mantises, all of which have been observed eating spotted lanternflies.

"Personally, I believe that your insect predators would be the best option," Johnson said. "Insects are generally considered 'naive' to the lanternfly's defenses because they have such short lifespans. They may not recognize that spotted lanternflies will be toxic to them, or bitter tasting, or not good to eat."

Targeting the tree of heaven has been a strategy of spotted lanternfly management for several years. The trees, native to China, also are an invasive species here. And although lanternflies also feast on our more valued native trees, from black walnuts and maples to pine and apple trees, the insects are adapted preferentially to the tree of heaven.

To reduce tree of heaven and spotted lanternfly populations, pest control experts often set up "trap trees" by killing most of the trees in an environment and leaving one that has been covered in insecticides. When the lanternflies feast on the trap tree, most of the insects are poisoned and die. At that point, the remaining host tree is removed.

The strategy has been successful in many areas, but the ever-resourceful lanternflies will simply eat whatever they can find, if need be.

That's where an army of predators might come into play, assuming that the toxicity of spotted lanternflies can be mitigated by reducing the tree of heaven. Augmenting predatory insects in an environment with more appetizing lanternflies could further chip away at their numbers.

We're trying to just get the populations (of spotted lanternflies) down to manageable levels at this point. Elimination does not seem like it's a viable option anymore."
– Anne Johnson, Penn State researcher

"If each of them takes out at least one, then you are making some good progress," Johnson said. "And then, if it does end up that through host removal, we can sort of eliminate those toxin defenses, then you're getting even better control with your natural enemies. Ideally, we get solid confirmation that toxin sequestration is a defense that they're using. Once we know for sure, we'll be in a much better position to mount a defense against it ourselves."

For the next several years, beating back spotted lanternfly populations is going to take efforts on multiple fronts. And when potentially $324-$554 million in annual economic losses are at stake in Pennsylvania, that's a scary thought.

USDA researchers are investigating the use of a tiny wasp species native to China (Dryinus browni) that is a natural predator to the spotted lanternfly. The goal would be to import them to the United States and let them go to work laying their eggs inside of baby lanternflies.

"When you go back to an invasive pest's native habitat and you find its natural enemies, that's called classical biological control," Johnson said. "It's a very old and very common method, and we have seen successes with that in other invasive pests in the past."

The strategy sounds promising, but lab experiments are required to ensure that the wasps won't target other species in the United States. That could take a while.

"The wasp is currently being worked on. They're checking to make sure it's not going after other species," Johnson said. "It will be quite a few years before they go through all the tests and necessary steps to be legally used in the United States."

In the meantime, it would be much easier to increase populations of native insects that show an interest in adding spotted lanternflies to their diets, particularly if they can be made more appetizing.

"What we generally try to go for in an entomological control program is an integrated pest management program, where you're attacking them on all sorts of different fronts," Johnson said.

But what about swarms of spotted lanternflies blocking entrances to buildings in Center City, North Philadelphia and University City? Is the only option a rampage of human feet?

"A rampage would help," Johnson said. "Basically, it's just using all of the tools that are at your disposal and as varied as you can to eliminate as many as you can. We're trying to just get the populations down to manageable levels at this point. Elimination does not seem like it's a viable option anymore."

Anecdotally, some people have observed that spotted lanternflies seem a bit more clever in 2020 than they used to be.

It's as if they've noticed human beings are gleefully killing them en masse. Who would have thought? They hop away a little more adeptly. They time their jumps more cleanly to escape. Could they be on to us?

"I would think that the dumb ones kind of die early on in the life cycle," Johnson said. "By the time you're an adult, you probably know how to get away a bit more. It could be evolutionary, but it could be that in some areas they've gotten more skittish and used to people."

People may have to start getting used to them too, even as we wrap trees in sticky traps, scrape egg masses and squish away like good patriots.

"Honestly, there's no good answer about what else you can do. As long as you're putting out those traps, doing the pesticide treatments, doing the egg scraping and stomping on them when you see them, that's about all the action you can take," Johnson said. "If everyone participates, we probably would be able to get these down to levels where they wouldn't be causing quite so much harm."