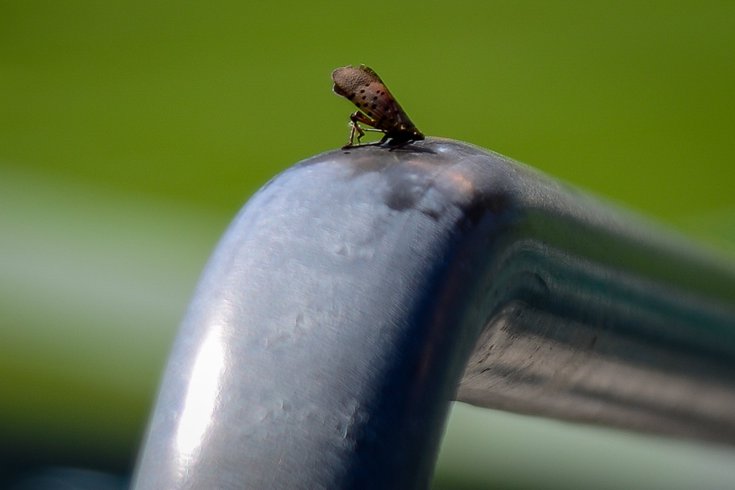 Each autumn, spotted lanternflies lay egg masses each containing up to 50 eggs across Pennsylvania.

In Pennsylvania's ongoing fight to eliminate spotted lanternflies, the state may have a new tool available to help thwart the insects.

Scent detection dogs could be used to identify spotted lanternfly egg masses and have them properly destroyed before they become fully-formed adults, according to a study conducted by the University of Pennsylvania's School of Veterinary Medicine.

LATEST: Spotted lanternfly expert talks predators, 'dumb ones' and how to win this war

"With up to 300 million smell receptors in their noses, properly trained dogs are uniquely positioned to provide an effective surveillance and management strategy in identifying and removing these egg masses that may otherwise go undetected," said Dr. Cynthia Otto, the leader of the study.

The new pilot program developed by Penn Vet began training dogs to sniff out spotted lanternflies last December. Eggs were presented to the dogs in a lab setting, either scraped off of tree bark or on a piece of bark removed from a tree.

Then, the dogs were instructed to identify live eggs in operational conditions, such as on cars, pallets, hidden under objects, and in other environments.

"We started with eggs that were killed by freezing to -80 degrees Celsius and then tested to see whether training on these eggs would also allow dogs to recognize live eggs," said Dr. Jennifer Essler, a postdoctoral researcher. "One of the most critical parts of our technique was making sure that the dogs could correctly alert from the egg mass odor and ignore the background odor of tree bark, which was surely on all of the eggs."

Preliminary results from the study found that the dogs correctly identified egg masses with up to 95 percent accuracy while also correctly ignoring non-target scents up to 93 percent of the time.

"These rates are averages from all of the training trials conducted during the study, so surely by the end of the trials, the dogs were performing even better," Essler said. "And, the proof-of-concept confirming the dog's ability to transfer easily from dead to live eggs paves the way for producing reliable training results unhindered by location or season – even during times when live targets aren't accessible."

The study is being supported by funding from the Pennsylvania Department of Agriculture.

The results of the study come about as prime egg-laying season gets underway across Pennsylvania this fall. Each autumn, spotted lanternflies lay egg masses each containing up to 50 eggs.

Because of their elusive nature, the egg masses can be difficult to identify. Even human intervention isn't enough on its own to stomp out the species.

Spotted lanternflies were first discovered in Pennsylvania in 2014. The commonwealth has placed 26 counties under quarantine in order to mitigate additional spread of the species across the state.

There have been over 62,900 public reports of spotted lanternflies in Pennsylvania so far in 2020, which is up by almost 72% year-over-year.