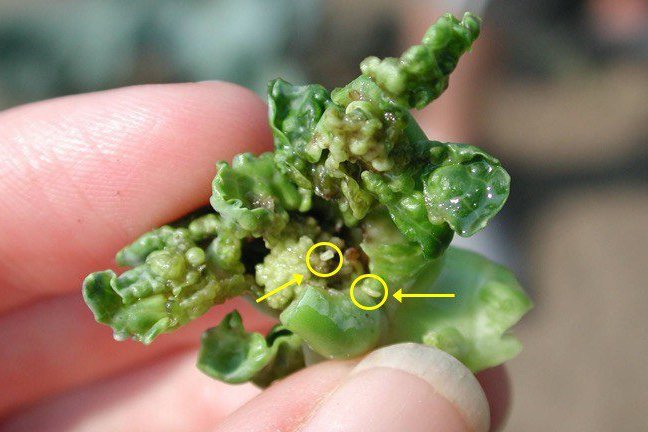 Swede midge can distort plant growth patterns by changing their physiology as the insects feed on them. One telltale sign, as seen in the photo above, is an abundance of moisture behind the leaves of a suspect growing tip. Larvae break down plant tissue in infected tips.

Entomologists in Bradford County have confirmed the first official case of a new invasive species in Pennsylvania, a tiny insect known as the swede midge.

Measuring just 1/16th of an inch, the pests are a type of fly native to Europe and Asia. They can pose a serious threat to Brassica or cole crops, which produce a range of vegetables including broccoli, Brussels sprouts, cabbage, cauliflower, collard greens, kale and turnips.

The discovery was made when researchers from Penn State Extension responded to a complaint from a broccoli farmer on July 16.

"To the best of our knowledge, this is the first occurrence of swede midge in Pennsylvania," researchers said. "However, the damage has been mistaken for molybdenum injury, herbicide injury, and various abiotic stress factors. Swede midge may be more widespread in Pennsylvania, but damage misdiagnosed, or it may exist in weeds or crops that are planted at higher densities, such as Brassica cover crops."

Swede midge belong to a group of insects known as plant-host specialists, which often cause distorted and damaging growth patterns. Their larval feeding induces changes in plant physiology.

According to Penn State Extension, swede midge overwinter as pupae and emerge in the spring. While adults live less than a week, they lay eggs in developing leaves that make up the growing tip. This often protects them from insecticides.

Management strategies in Canada and other parts of the Northeast U.S., where swede midge have been present for years, often depend on ecology. Sometimes, this means removing a host resource by strategic rotation, sanitation and avoidance of Brassica cover crops. Some systemic insecticides are effective, but organic insecticides only have been partially successful.

"There has been a tendency for this pest to be more of a problem on smaller, diversified farms, and organic farms," the researchers said.

At this time, current evidence suggests swede midge may still be rare in Pennsylvania, and thus the best management tactic is developing skilled systems of early detection.

The discovery comes as Pennsylvania battles the much more pervasive threat of the spotted lanternfly, which officials have estimated could cost the state's economy $50 million per year if infestations are not brought under control.

Resources for identifying swede midge and tips for best practices in their management are available through Penn State Extension.