The ESPN host is partnering with Dove Men+Care for its newest ad campaign. He also wants Jalen Ramsey in midnight green. 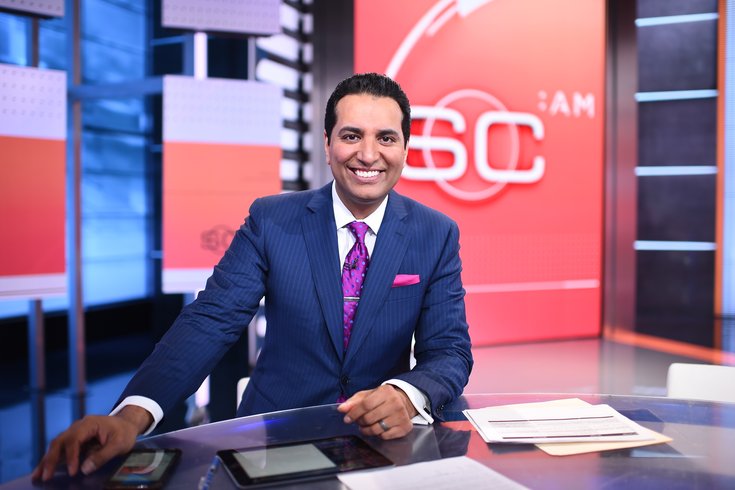 ESPN host Kevin Negandhi was born in Philadelphia and grew up in Phoenixville. He's spent time all over ESPN's networks, and he has a few takes about Philly sports.

Kevin Negandhi, the popular ESPN host and personality who hails from Philadelphia and graduated from Temple University, is one of the loudest Philly fans in sports media. It's a good thing.

But Negandhi also likes making time for the highlights we don't always watch, which is why he recently partnered with Dove Men+Care for a campaign promoting its new Sportcare products.

The campaign highlights three everyday athletes — including a man who happens to be named Chris Paul! — who still play sports regularly, finding time in their otherwise busy lives. Negandhi identified with the campaign (he said he's recently gotten into Peloton, and also loves running flag football plays with his sons on Saturday mornings) and thought it was a natural fit.

"Obviously, on a daily basis working at SportsCenter, I talk about superstar athletes all the time," Negandhi told PhillyVoice on Thursday. "But I thought this was such a unique campaign because we're kind of highlighting my audience, right?

"When you get to know these guys, you see their common bond, you see their passion, and you understand why they continue to play sports well past the highlights of their years when they were teenagers, or in their 20s. They're guys who have families, guys who break stereotypes, and I thought it worked out perfectly."

It feels similar, Negandhi said, to SportsCenter shouting out a middle school basketball player amidst a highlight package of LeBron James dunks and Mike Trout homers.

"I love doing that," Negandhi said. "What you're doing is — it's something relatable to the audience. In that town, at that moment, that kid or that teenager is the star. They're everyday athletes."

Of course, when we get down to it, Negandhi loves talking about sports' biggest names, including one he wouldn't mind adding to the Philadelphia sports scene: Jalen Ramsey.

"I think that, if you can find the No. 1 cornerback in the NFL in his mid-20s, and you have the money to pay him, you start to think," Negandhi said. "If you're a playoff team that's going to get a pick in the 20s, do you have time to develop a cornerback?"

How many games does Temple football win?

"I said at the beginning of the season, knowing and understanding the talent on the team and the quarterback play, with Rod Carey coming in, I thought the team was an eight- or nine-win team. That hasn't changed. I think the American's going to be tough, but I still believe they're at least a nine-win team."

Do the Sixers make the NBA Finals?

"I think it's going to be a battle between them and the Bucks in the Eastern Conference Finals, and I think they reach the Finals. I really do. I think we're going to see a different Joel Embiid this year, and the addition of Al [Horford] will help him immensely."

Do you bring Gabe Kapler back?

"No. The résumé speaks for itself, if you look at the final two months of the last two years. And I also point to one specific thing: tell me three players that have gotten better, in the last two years, under Gabe Kapler. It's very tough. I think they've taken a big step back with all their arms — I've not been happy with the coaching staff. I think major changes are necessary for the Phillies going forward. Especially with the expectations when you have Bryce Harper here, the talent of J.T. Realmuto, [Scott] Kingery, [Jean] Segura, [Aaron] Nola. They need to have a direction, and a direction that's going to actually work."

Is Gritty the best mascot in Philly?