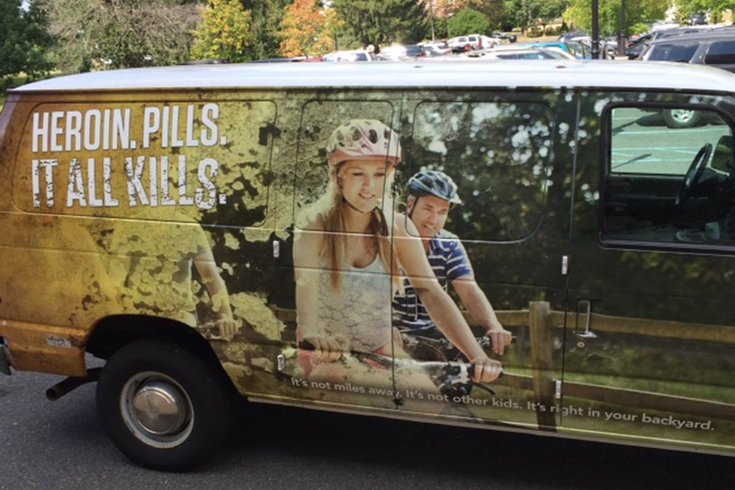 Camden County is using this van as part of its drug treatment outreach program.

Naloxone, also known by the brand name, Narcan, now in the hands of Camden County's first responders, reverses the effects of an overdose and blocks the body from shutting down.

The so-called opioid antagonist reverses the respiratory depression that accompanies a drug overdose.

But the underlying drug dependence remains, ready to pull an addicted survivor down again.

To combat the addiction, the Camden County Freeholder's Board on Wednesday unveiled an innovative outpatient detoxification program that will be offered to those treated for an opioid overdose – drugs such as heroin, oxycodone, hydrocodone, oxymorphone, hydromorphone, methadone, and others.

Camden County officials, who on Wednesday recognized the first-responders who have saved more than 300 lives since May 2014, when Narcan became widely distributed, said it is a first-in-the-state initiative.

The goal is to hand off users to an intensive outpatient treatment program at Delaware Valley Medical in Pennsauken, according to Freeholder Director Louis Cappelli.

From there, they can be moved to an in-patient facility when a bed is available or they can continue with outpatient therapy if a case manager believes that is appropriate.

The program, Operation SAL (Save A Life), is coordinated by the county's Addiction Awareness Task Force and is named for Sal Marchese, an addict who died from an overdose five years ago, unable to find room at a detox program.

His mother, task force member Patty DiRenzo, an advocate for addicts and their families, choked up repeatedly after the program was announced and she addressed the room.

Afterward, she said it was "amazing to me" that she could look out at a banquet room and know the region's first-responders had saved 300 people and also saved all those families from the heartache of a drug death.

DiRenzo said the program shows "there is hope." She added she felt honored by the program's naming in memory of her son "who didn't get the treatment he needed."

But she also added keeping her son's memory alive "is absolutely bittersweet."

Cappelli said the program is open immediately because "there is an epidemic right now."

Initially, the program will begin with $150,000 in grant money, which the county believes would fund treatment for about 50 people.

"If more people want it, we will ... find more money. We will fundraise," Cappelli said.

Not enough priority is given to treating addiction and mental health, said Cappelli, adding that insurance companies "need to get on board."

He also said medical providers are too free with prescribing pain pills, which makes them more available on the street and in turn fuels a demand for heroin, which is actually cheaper for a hit than most opioid pills.

The county has enlisted the support of its four hospital systems -- Kennedy Health, Virtua Health, Cooper University Health Care and Our Lade of Lourdes Medical Center -- to create the program.