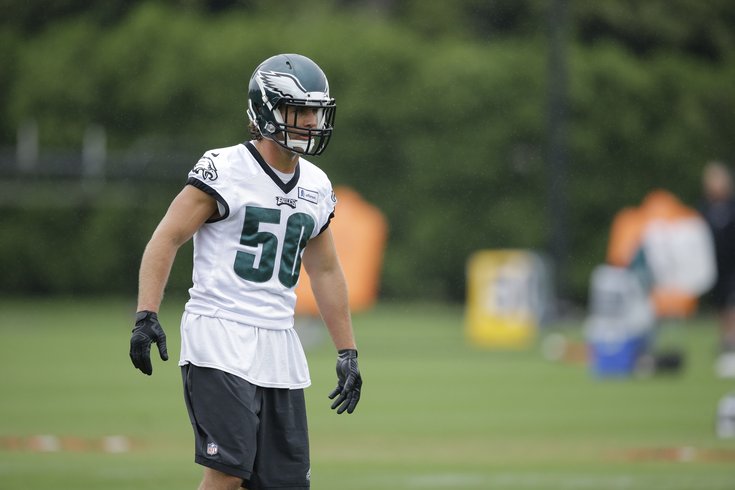 Kiko Alonso, before he ran head first into something/someone.

One of the Eagles' biggest offseason acquisitions, linebacker and former defensive rookie of the year Kiko Alonso, hasn't been able to show much so far in training camp. That's because the former Oregon Duck, who was acquired from the Bills in the deal that sent LeSean McCoy to Buffalo, has been sidelined since suffering a concussion two weeks ago at the Eagles first open practice.

On Tuesday, he was back out on the practice field with the rest of the team -- they practiced in shorts in the 95-degree heat -- but according to his coach, he won't be a full participant.

"Kiko will be out there today," Kelly said. "He'll be running around; he's got his helmet on. We'll ease him back in. He's missed a few things so he won't go full practice."

After tearing his ACL last summer and missing the entire 2014 season, there has been little chance to see if Alonso is feeling any lingering pain or discomfort in his left knee. All indications, however, have been that he's moving around just fine, but the real test won't come until he gets in some game action.

And Kelly thinks that will come sooner rather than later.

"I think mentally, he's good," Kelly added. "But he has been out for two weeks, so he'll go through agilities and individual drills today. And then just seven-on-seven. I don't know if they're going to put him in on team [drills], but he should be good to go by the end of the week."

The player expected to start alongside Alonso at inside linebacker, DeMeco Ryans, did not return to practice Tuesday. Kelly said he will be back on Wednesday when the team welcomes the Baltimore Ravens for joint practices ahead of their preseason matchup Saturday night.

If all goes well, that should be the night both players get their first crack tackling an opposing player.

Unfortunately for third year safety Earl Wolff, his days in Philly may be numbered.

If there's one thing Kelly values in his non-starters -- aside from the ability to play special teams -- it's health. A player can't contribute if he can't get on the field. And ever since joining the Eagles, Wolff has spent most of his time trying to get, and stay, healthy. He missed half of last season -- a season in which Billy Davis' defense desperately needed secondary help -- with the same injury.

After only practicing on a limited basis, Wolff was inactive against the Colts on Sunday. After the game, he spoke to Eliot Shorr-Parks of NJ.com and said that he still hopes to play this preseason, but surgery could be the next step:

"It's just been getting worse and worse every day," Wolff said to NJ Advance Media. "It got to the point where I couldn't walk after practice."

After starting against the Houston Texans in Week 8, Wolff was inactive the rest of the season, and eventually required surgery. The safety revealed earlier this preseason that he hasn't felt 100% since entering the NFL two seasons ago, but said he felt great at the start of training camp.

Wolff, who said he will speak to Dr. James Andrews soon, would not rule out another surgery.

"I hope not," Wolff said of going back under the knife. "Right now we are just waiting for the swelling to subside."  [NJ.com]

Wolff was held out of practice again on Tuesday, and just by listening to Kelly's reason for why, you get the sense that he former NC State safety's time on this roster may be running out.

"He says he can't run on it," Kelly said of his safety's injured knee.

Chip saying Earl Wolff "says he can't run" on bad knee is really the kiss of death for Earl here. Much like "he's been cleared" in spring.

Also working against him is the fact that Ed Reynolds, a second-year safety from Stanford who was on the practice squad last season, played extremely well in the Eagles first preseason game, finishing with two big interceptions -- while Wolff could only look on from the sideline.

Still the Eagles need depth at safety, and Wolff could certainly provide that. As long as he can stay healthy.