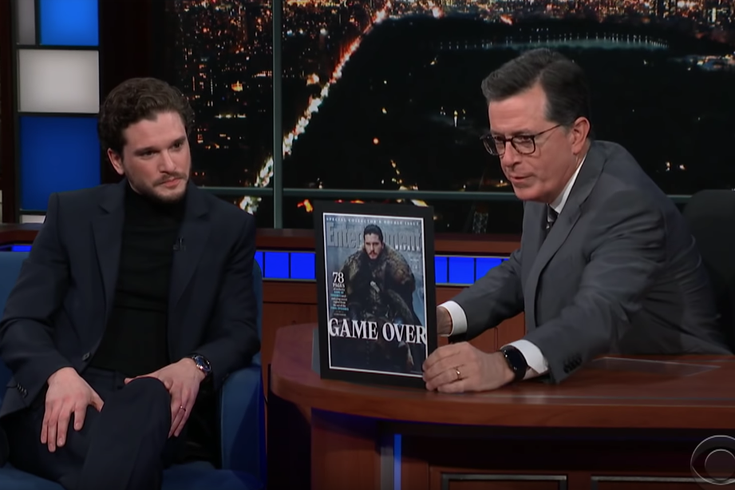 Kit Harington (Jon Snow, "Game of Thrones") appeared on "Late Show with Stephen Colbert" Tuesday night and talked the final season and how he, quite literally, couldn't say anything.

The actor discussed his frustration with interviews when there's nothing to say.  “We can’t say anything. That’s the problem. We’re all in the same boat, all of us in the cast, kind of turning to each other going, “What do you say?” And you can’t even say lies, I can’t even make something up.”

He notes that he can't even casually mention lies due to the fact "that gets picked up, and they pick that apart, and the thing that might be true - they’ve narrowed that out of it. It’s just, it’s a minefield.”

Colbert discusses how the show made such a notable impact on the 2010s, but Harington mentions that the show may have altered politics. “I’ve got this theory that we kind of screwed the political landscape," he said. “I just felt that certain political figures tried to emulate Joffrey, you know. Things went a bit wrong.”

Politics aside, Colbert tried his hardest to get at least some intel from Harington, so he decided to put a camera on the actor as he read out-loud some of his "theories" to how the show ends.  His theories include: “In the final scene we see George R.R. Martin watching the credits roll, he says, 'That’s a great idea!' And finally finishes his book," to a "Sopranos" reference, "Journey's 'Don't Stop Believin'' plays and it cuts to black."

Colbert also gives his not-very-believable-but-wouldn't-that-be-nice theory, “Turns out the real game was how we made friends along the way,” to which Harington chuckles and shakes his head no rather bluntly.

But his last theory is the ultimate theory: “Jon Snow has a son, and names him Tony. House Stark. Tony Stark. He’s Iron Man - the ultimate cross over."