Larry the Cable Guy talks about how PC's impacted comedy, scrapple and Comcast 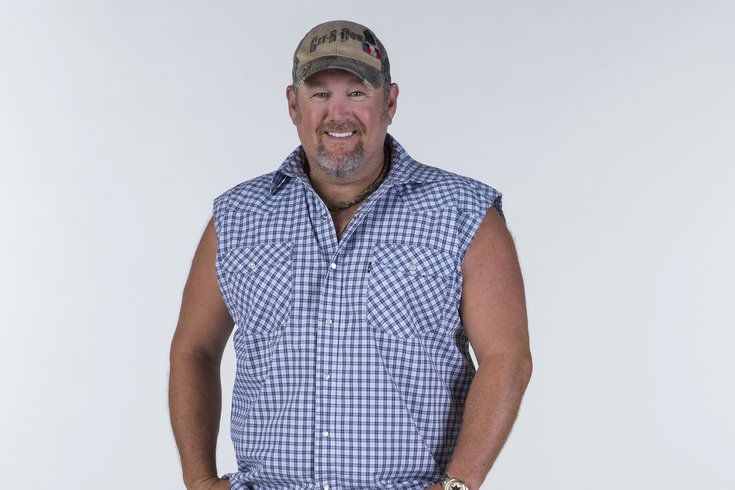 Larry the Cable Guy will appear at Parx Casino in Bensalem on Thursday, August 18, 2018.

Chances are, very few of you will recognize the name Daniel Lawrence Whitney, but chances are that you’ll recognize his southern drawl-slinging, sleeveless flannel-shirt and camo hat-sporting alter ego.

Whitney is widely known by his comedic character Larry the Cable Guy, who will appear at Parx Casino in Bensalem for a Thursday night show.

Aside from a lucrative career – buoyed by stints as the cartoon tow truck Mater in the “Cars” animated films – Larry the Cable Guy doesn’t regularly make headlines. But when he does – like back in 2016 when he said electing Hillary Clinton to the presidency “will be the end of the country” – the story prompts quite a bit of discussion.

In advance of his upcoming local show, Larry (and Daniel) gave PhillyVoice a call on Friday afternoon to talk about an array of topics (over the course of the 10 spare minutes he had.)

Having looked back at your career, something struck me as being akin to America itself these days. Back when you started, I think you might have been a bit of a novelty to northerners, someone who validated their stereotypes about southerners. When your career as Larry the Cable Guy took off, that could’ve elicited some resentment from comedians and the general public. Am I correct in thinking that?

Daniel Whitney: Comedians wise, they all knew I was a guy who worked hard, that I called radio stations all the time, that I put in my time and didn’t just pop up overnight. I literally worked. I drove the car around. I emceed. I was an opening act. I headlined sometimes. I had gigs on the radio.

Most comedians knew me and what I was doing. I have good relationships with 98 percent of the comedians out there, so I didn’t get that a lot. The only “who’s this guy?” reactions I got were from some guy at an open mic night in 2000.

I never really look too deeply into what I did. It’s like Jeff [Foxworthy]. He writes redneck jokes, but the thing is, anybody who grew up outside of a major city pretty much grew up the same way. The things Jeff talks about are the things I did as a kid. There are all different kinds of rednecks, though: Honey Boo Boo, Larry the Cable Guy, Roy Clark. They’re all different.

When I went out [into this career], I wanted to make people laugh and be funny. With the radio stuff, it got political because I had to come up with something to talk about. My stand-up was never political, though. When I merged stand-up with Larry the Cable Guy, there were some political jokes, but I try to keep it more one-liner and lighthearted. I never really set out to do political jokes.

Does today’s PC climate have an impact on your act and the industry itself?

DW: The cool thing about my crowd is that they love to laugh and have fun. Like with anyone else, if you don’t like it, don’t come. Who gets to decide what’s offensive and what’s a good joke? Comedy is subjective. Comedy is about pushing buttons. Comedy involves topics that might be taboo to talk about.

I have a couple buddies who are sick. They joke all the time about their sickness. That’s what helps get them through the day. If someone complains about that, you know what, he’s not your son. This is his way of dealing with it just like you deal with something differently.

Comedy is so subjective. I personally don’t care. They’re draining all the fun out of everything.

That’s what’s always been fun about my crowds. I think it’s awesome that they want to come see me if they say they can only go to four shows a year. I don’t talk down to them. They’re here to laugh and have fun.

I know I cross the line a little bit, but you know what? Comedy never killed anybody. Being offended has never left somebody covered in boils. It’s annoying. Comedy is escapism.

I read that you grew up on a farm raising pigs. What do you think about scrapple?

Since you’re a cable guy, what are your thoughts about everything going digital and of Comcast itself?

DW: I think that DirecTV is nuts that they don’t have a Larry the Cable Guy commercial saying I switched to DirecTV. It’s the dumbest thing ever that they haven’t done that. The funny thing is, though, I’ve never done any jokes about cable TV.

Has your act changed at all from the ‘Git R Done’ tour days? What should people expect at Parx?

DW: Not really. I just love what I do.

People who complain about Foxworthy only doing redneck jokes or Larry the Cable Guy doing Larry the Cable Guy jokes just focus on a small part of the act. I may say “Git R done” three times during a show, but meanwhile, I’m writing and delivering hundreds of jokes.

That’s all about comedy snobs and all that. Honestly, I don’t even think about it. Don’t even talk about it. I just like to make people laugh and the fact that I’ve been successful at it, I’m very thankful.

I’ve made it to a place that few comedians make it. But now, with a pair of kids at home, they’re 10 and 11, I like just hanging out at the house. I’m doing 30 shows a year now even though I used to be out there all the time, 260 days a year. If you want to see Larry the Cable Guy, you better go see him because there are fewer chances now.

I do it still because I love making people laugh. Politics doesn’t come into it. There are a lot more important things. People who come out to see me will get the same thing they’ve always gotten: Quick one liners at such a fast pace that when they’re still thinking about one joke, I’ll be six ahead of them.