Ice Cube to Bill Maher: 'Sometimes you sound like a redneck trucker' 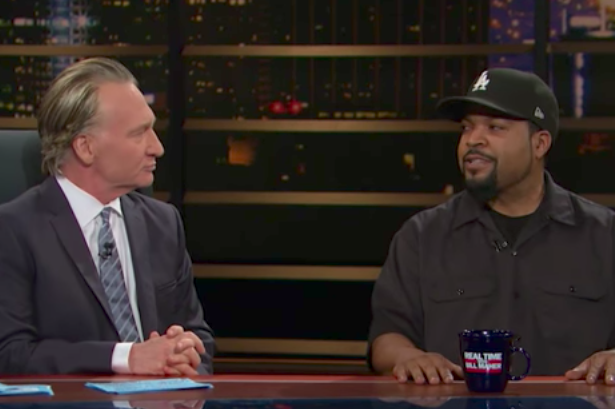 Ice Cube (right) talks to "Real Time" host Bill Maher on Friday night's show about Maher's use of a racial slur on last week's show. Cube dug into the issue, calling it a "teachable moment" for Maher and his viewers.

Before promoting the re-release of an album, rapper and actor Ice Cube had some choice words for Bill Maher Friday night on HBO's "Real Time."

"I knew you (were) going to f--- up sooner or later," Cube joked, drawing laughter from the talk show's audience.

But the rapper, who released the 25th-anniversary edition of his 1991 album "Death Certificate" this week, pressed Maher about last week's "Real Time," in which the comedian and political satirist dropped the n-word. Maher immediately came under fire for the comment, and he apologized the next day.

But that wasn't enough for his guest.

And Cube, to his credit, picked Maher apart for the better part of the segment.

"I love your show," he told Maher. "But you be buckin' up against that line a little bit. You've got a lot of black jokes, you know what I'm saying? You do."

"Sometimes you sound like a redneck trucker up here," he told Maher.

That comment, Maher said, "I gotta push back on."

On Friday, Maher called his use of the racial epithet "my transgression."

In last week's show, Maher had brought on Republican U.S. Senator Ben Sasse from Nebraska as a guest. Sasse invited Maher to visit Nebraska and "work in the fields with us."

In Friday's show, Cube asked Maher what made him think it was "cool" to use the slur.

"There was no thought put into it," he said. "Comedians, they react. I was wrong, and I apologize. More than that, I can't do."

Cube said he accepted Maher's apology, but added, "I still think we need to get to the root of the psyche."

In what he called a "teachable moment," the rapper stressed what it's like as an African American to hear someone who is white say the n-word.

"When I hear my homie say it, it don't feel like venom. When I hear a white person say it, it feels like that knife stabbing me, even if they don't mean it," he said.

Earlier on Friday's show, Maher invited another guest, Georgetown sociology professor Michael Eric Dyson, to "school me" on using the slur, saying "I did a bad thing." That clip can be found here.