Lector attacked during Sunday Mass at Cathedral Basilica of Ss. Peter and Paul 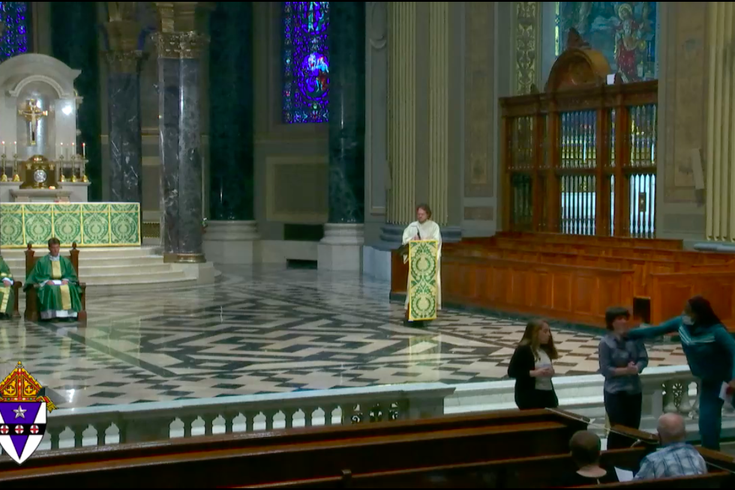 The screenshot above is taken from the video broadcast of Sunday's Mass at the Cathedral Basilica of SS. Peter and Paul. It shows a woman, who was a lector during the service, being struck in the face by a person who appeared to wait for her to leave the altar.

A woman was attacked as she left the altar during Mass at the Cathedral Basilica of SS. Peter and Paul on Sunday, and the incident was broadcast live by the Archdiocese of Philadelphia.

The footage shows a person with long hair and wearing a facemask strike a woman, who was a lector during Sunday's 11 a.m. Mass, twice in the face as she attempts to return to her pew.

The incident occurs about 32 minutes into the video below.

On his Facebook page, Philadelphia Archbishop Nelson Perez called what happened "a senseless act of aggression."

"Such behavior is unacceptable at all times, especially within the confines of a church building and during the celebration of the Holy Mass,” Perez said. “I was saddened to learn of this incident and regret that it took place."

The lector received assistance from staff members at the cathedral, Perez said. She did not require medical attention and is doing well, he said.

"Please be assured that there are safety and security plans in place for the Cathedral Basilica of Saints Peter and Paul," Perez said. "We welcome all visitors and work to provide for their safety. Violence has no place in our world and every life is a precious gift from God."

Any information on the assault that occurred inside Saint Peter and Paul Cathedral today at approx 11am, contact Central Detectives at 215-686-3093/3094 OR Tip Line. pic.twitter.com/TpLxHY1EUK