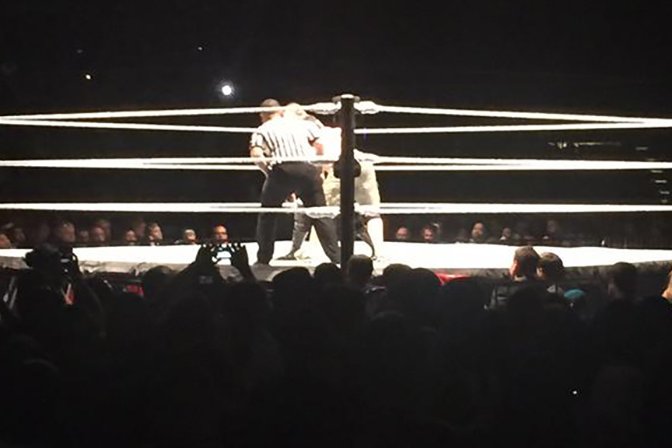 The Summerslam Heatwave Tour reached Philadelphia on Friday night, as WWE rode into town for the first time since January’s Royal Rumble. The fact that this event wasn’t being taped or shown live on television brought a little bit of a laid back atmosphere as the wrestlers could just go out and have fun and not worry about screwing something up on national television. That’s the beauty of these types of events – it just looks like the wrestlers are having so much more fun.

And Friday night was no different, especially in the Tag Team Championship match. More on that later.

Here’s what happened Friday night at the Wells Fargo Center:

By the time Philly.com’s Vaughn Johnson and I reached our seats, the first match was over. I’m not sure if the Intercontinental Championship was on the line, but I would imagine so, since the Tag Team Titles, Divas Title, and WWE World Heavyweight Title were all on the line Friday night. As we were walking the concourse to our section, we heard the three count and win for Ryback. We don’t know how he won, but we’ll assume he Shell-Shocked Mark Henry because why not?

This match may have been the most entertaining as it pertains to action outside of the ring. The New Day was performing their usual act of just being annoying clappers, but they were so much more obnoxious on Friday; continually posing for the crowd, taunting their opponents, and taunting individuals in the first few rows. Kofi Kingston even faked throwing his T-shirt into the crowd before throwing it to Xavier Woods on the outside of the ring. He legitimately got booed for that, too. This team’s charisma has grown even after losing the Tag Team Titles to the Prime Time Players.

New Day celebrating after a shoulderblock. This match has already entertained the masses pic.twitter.com/xpbv7gjWoq

As for the Prime Time Players, Titus O’Neil is absolutely huge in person. I don’t think WWE really gets that through to the audience when he’s on television, but that’s obviously by design. Why they don’t want O’Neil to be viewed at as a giant leaves me scratching my head. Of course, part of the reason could be the thinking that if he’s so huge and dominant, he doesn’t need to be in a tag team. I love him in his current role and can really carry a match with his charisma. In-ring talent? Meh. O’Neil got the pin on Kingston after a Clash of the Titus.

One of the biggest pops of the night went to Jericho, who is old according to the guy who sat behind me. I mean, I can’t disagree with him. His wife said Luke Harper looked like an old man with no muscle to him who wears his Dungarees up to his nipples. That conversation may have been the best or worst part of my night. I haven’t decided yet.

The two had a good back-and-forth match that ended after Jericho caught Harper with the Codebreaker. Harper’s really in No Man’s Land right now without his partner, Erick Rowan. Rowan, who’s recovering from a torn bicep, and Harper would likely have been given a Tag Team Championship reign had the injury not occurred. So, for now, Harper’s lost in translation.

We don’t have to wait until Battleground, we’re getting our United States Championship match early. Of course, this is just some pre-event warm-up matches the two are currently having, as they’re facing each other on an almost nightly basis. It doesn’t cheapen it, though, because their matches are always excellent, and Friday night at the Wells Fargo Center was no different.

Owens enjoyed doing his Cena impression for a bit, hitting all of Cena’s signature moves including the Five Knuckle Shuffle. A lot of near falls in this one, with finishing moves not meaning much. Cena once again put on a clinic and perhaps quieted some of the critics. And the ending of this match, though not on television, was perfect and a great way to protect both wrestlers heading into Battleground next week. Owens low-blowed Cena and was disqualified.

After the match, he acted like he was going to attack Cena with the United States title belt, but Cena hit Owens with an Attitude Adjustment and Owens scampered off. Good way to protect Owens even though it wasn’t on television, and a good way to send the kids home happy.

Intermission. Which meant I stay in my seat and people watch.

This match apparently included a fan vote for whether they wanted to see Nikki’s sidekick, Brie, and Naomi’s sidekick, Tamina, stick at ringside or be banned to the back. The [curious] vote was 60% in favor of having both ladies stay at ringside, much to the chagrin of Paige, who had nobody to back her up. She tried hugging the referee hoping that he’d somehow be able to help her, but it was not to be.

Paige walked into a superkick on the outside by Tamina while Nikki was able to hit the Rack Attack on Naomi to retain her Divas Championship. I sincerely hope once Nikki breaks A.J. Lee’s record [it’s pretty obvious that’s what WWE wants to do] that she loses the title to either Paige or somebody coming up from NXT. I can’t stand her as Divas Champion. And that’s not because she’s good at making me dislike her, it’s because she’s so boring and I can’t stand being bored. Ever.

Another match that’ll supposedly happen “for the first time” at Battleground next week. I’m sure it was a good match, but funnily enough, this was my bathroom break match. Go figure. Reigns got the win with a rollup. So there’s that.

This match was probably a bathroom break for others, but these guys can really work. Neville has continuously been dynamite since being called up to the main roster after WrestleMania, and Dallas is just awesome in his character. Neville hit the Red Arrow for the win, as you can see by my spectacular video above.

This match had all the ingredients to be a quality pay-per-view main event. Tables, chairs, a kendo stick, a leather belt, and a microphone. Yup, a microphone.

The match started pretty quickly and it’s clear these guys know each other so well as each move and counter were so smooth that you’d think they practiced this match literally ten seconds before going to the ring.

And maybe they did.

Children are screaming they want tables. Rollins fakes getting one from under the ring. Grabs the mic and tells us to shush. #WWEPhilly

During the match, Rollins took the mic and ran down Philadelphia-born and bred Extreme Championship Wrestling, to which a lot of kids in the audience started chanting, “ECW!” Sure, it was a funny moment for me because I doubt any of those kids know what Rollins was referencing, but it was a cool aside from the match. He called the audience degenerates and scumbags for liking ECW, so he ultimately lost any good will from the people in the audience who wanted to cheer him because he was “cool.”

The ending sequence was crazy. I tried to keep track of it. Rollins hit Ambrose with a Pedigree, but Ambrose kicked out. Rollins powerbombed Ambrose through a table that he set up in the corner of the ring, but Ambrose kicked out. After another table is introduced in the ring, Ambrose drives his elbow through Rollins through the table and goes for the pin, but Wyatt interrupts and gives a Sister Abigail to Ambrose, allowing Rollins to pin him for the win.

Yeah, the fans weren’t happy, but that wasn’t all. Wyatt and Rollins continued attacking Ambrose when Reigns came down for the save. Wyatt, however, was able to temporarily rid him of the equation. Mr. Money in the Bank, Sheamus, made an appearance, and the people who were already leaving the arena had to turn back and head back to their seats because they thought they would witness history.

But that was not meant to be. Reigns eventually got to Sheamus and Ambrose rid the ring of Wyatt and Rollins so the two faces could end the show on a high note.

I mean, I didn’t expect much in terms of titles changing hands or any storyline progress from this show, but it didn’t make it any less entertaining. In fact, it may have been more entertaining. The matches were either good or great. WWE announced its coming back to Philly on October 6th for a SmackDown taping.

Don’t forget: Battleground is on tap for next Sunday, so get ready for my predictions coming your way later this week.