Looking at the Phillies’ draft picks in Rounds 3-7

Mullin hung out with new scouting director Johnny Almaraz last night, and he wrote about the Phillies’ first two selections in the 2015 Major League Baseball First-Year Player Draft: 10th pick Cornelius Randolph (SS/3B/LF) from Griffin HS (GA) and 48th pick Scott Kingery (2B) from the University of Arizona. In short, one is a riskier high school kid who can flat out hit but doesn’t have a position yet and the other is a safer college bat who could move through the system fairly quickly.

When Almaraz formally introduced himself last week, he defined success as finding major-league contributors in each of the first three rounds. The criterion obviously isn’t meant to be looked at in a completely rigid manner, but the point holds true that teams still hope to find value after the first day. We won’t be writing “What I like” posts about any of these guys (because we’ve truthfully never heard of most of them), but here’s at least an introduction to players who could enter the Phillies’ minor-league system shortly.

With the 83rd pick, the Phillies selected another high school shortstop. This time, they went out of the box and picked a guy who wasn’t on most people’s radar. To prove that point, I went the 100 percent scientific route of taking a screenshot of MLB.com’s draft tracker. Only one other player picked near Williams doesn’t have video: 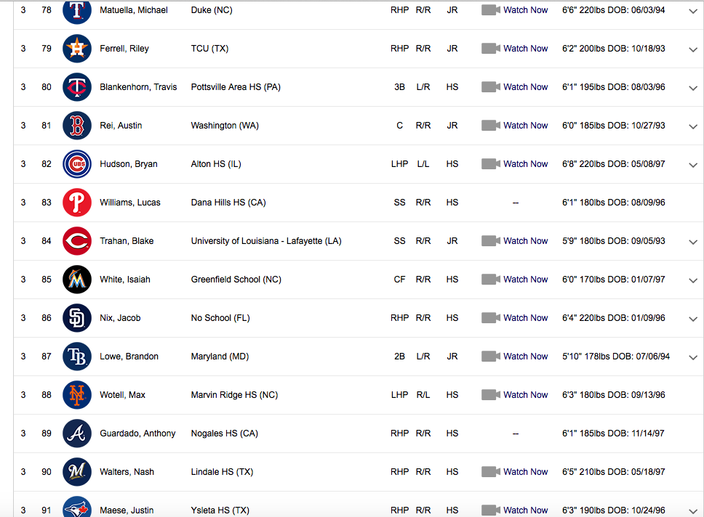 It’s not a huge deal, though. Here’s a little bit of Cool Hand Luke’s background from what appears to be a local periodical that knows him well:

Williams batted .315, stole 26 bases and had an on-base percentage of .454. He had nine extra base hits on the year, including four home runs, and collected 19 RBI.

Williams, who holds a commitment to Cal Poly San Luis Obispo, left the Dolphins program as its all-time stolen base leader.

Round 4: Kyle Martin, 1B, University of South Carolina

At 114, the Phillies went with a senior bat with impressive numbers (.350/.455/.635 with 14 HRs) who was a First-Team All-SEC performer. One of the perks to picking a senior at this point in the draft? They come much cheaper.

The slot value for Kyle Martin is $498,200 but as a senior, he'll sign for considerably less than that. It'll probably be in the $50K range.

Looking at who the Phillies took in rounds 3 to 5, wouldn't be unreasonable to assume they could have over $1M to go overslot with

It will be interesting to see if the Phillies can spend any additional money in the later rounds to sway a prospect/prospects who might’ve been leaning to go to or stay in college.

Finally, an arm. Unlike fellow SoCal high schooler Williams, MLB.com does have video of Falter accompanied by weird background music, a must for any official scouting clips.

Falter has what they call “a projectable build” in the scouting game at 6’4” and 170 pounds. Maybe the Phillies think that as his body matures, they could have a steal here.

The real USC! The Phillies have now taken three high school players and three college players, so it’s pretty hard to pigeonhole what Almaraz and co. are looking for like some may have thought before the draft. At first glance, it doesn’t seem like the new scouting director has “a type.”

After transferring in from junior college, Gilbert mostly pitched out of the bullpen for the Trojans. This season, he went 5-2 in 67.2 innings pitched with a 2.79 ERA 66 strikeouts, and 25 walks.

Great name, great school that put an upset scare into Arkansas in the NCAA Tourney in March.