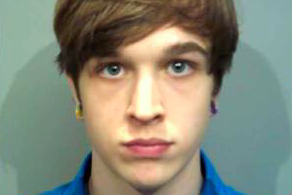 A 20-year-old Connecticut man is facing multiple charges after authorities say he made a threatening reference on Twitter to a possible bombing at a Donald Trump rally in Waterbury.

According to the Connecticut State Police, the United States Secret Service (USSS) alerted them to the post made by Sean Taylor Morkys at around 12:46 p.m. Saturday afternoon.

"Is someone going to bomb the trump rally or am I going to have to?" Morkys allegedly tweeted.

In a follow-up tweet, Morkys allegedly warned his friend to have family members leave the rally so that they wouldn't be harmed.

Investigators with the USSS said they were able to determine that only Morkys, whose posts appeared publicly, had access to the account during the time of the tweets.

State Police Counter Terrorism detectives, Waterbury Police Department detectives and special agents from the USSS were able to locate Morkys at his Waterbury residence, where he was interviewed and later taken into custody. He was processed and released on $25,000 bond pending a May 4 court date. Morkys faces charges of first-degree threatening, second-degree Breach of Peace and Inciting Injury to Person or Property.

Trump, who holds a 10-point lead in Pennsylvania over nearest GOP rival John Kasich, will appear at West Chester University Monday afternoon ahead of Tuesday's primary election. Student groups have protested the rally in an online petition, but West Chester's interim president says the event reflects the university's commitment "to the free exchange of ideas."

West Chester's campus police will coordinate security for the event with the U.S. Secret Service, Pennsylvania State Police and other law enforcement agencies, he said.