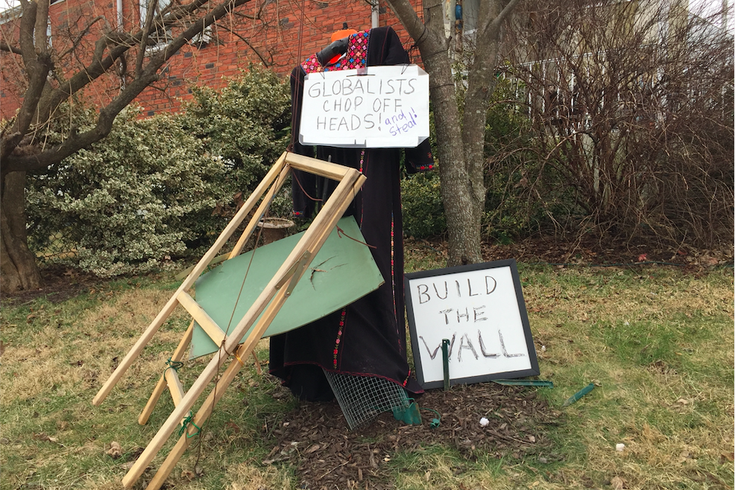 Gaile Amin had a political display supporting the border wall on her front lawn in Northeast Philadelphia for the past two weeks. On Monday night, someone beheaded the mannequin that was part of it, smashed her signs and stole a Palestinian head scarf.

To hear people who live near the corner of Dungan Road and Hoff Street in Philadelphia’s Bustleton neighborhood tell it, the political display had stood outside their neighbor’s house for about two weeks.

A mannequin dressed in Middle Eastern garb stood next to a pair of signs reading “Build the Wall” and “People without BORDERS have no country!” It was the type of imagery that seemingly sets people off in our continually outraged nation.

But a pair of neighbors said Tuesday that nobody paid the display much mind until the day before, when TV news vans showed up on the scene to report about the resulting controversy prompted by longtime resident Gaile Amin’s pro-wall statement.

According to the neighbors – unwilling to give their names so as not to antagonize a fellow neighbor because, in the words of one, “it’s not my business” – the story had shifted in a new direction.

At some point between Monday afternoon and the 11 p.m. news, the mannequin was beheaded and the frame holding the signs had been broken by an unknown vandal.

The “Build the Wall” portion remained intact on Tuesday morning, leaning against a front-yard tree while a replacement sign’s message had been updated to reflect what had happened overnight: “GLOBALISTS CHOP OFF HEADS! And Steal!”

Amin would find the head on the sidewalk outside her home. The scarf she had on the mannequin, and one of the signs, had been stolen. She didn't call Philadelphia police's 2nd District because, in her estimation, it didn't rise to that level.

Speaking to PhillyVoice about the vandalism, Amin was concerned not only for her property, but for the tenor of a country in which this sort of thing could happen.

She posited that the only reason it drew attention in the first place was because of the Palestinian head scarf, or kofi. She also said her son alerted her to the damage late Monday night, but she was too tired to head outside to take a look until morning.

“She has the right to express herself. She’s doing it on private property." – Mohamed Yousef

"I remembered what my son said, 'Somebody is going to come and smash it. You should do a GoFundMe page when that happens,'" she said Tuesday afternoon. "It must have been a very angry person. I even had a dream about it last night, thinking somebody would say it was the wind.

"It's as if they want to block all freedom of speech. The first thing that comes to mind is antifa, the anti-first-amendment people who say, 'No borders, no walls, no U.S.A. at all.' This is somebody's way of shutting me down. I guess they think it was a threat, like, 'the head's gone. What do you have to say now?'"

Since he’d been interviewed on the local television news a day earlier, PhillyVoice also reached out to Mohamed Yousef of the Palestinian-American Community of Greater Philadelphia for his thoughts on the controversial display, and the resulting vandalism.

He said he, too, is upset about what happened to the display, particularly because his pleas for those offended by the display to not turn to violence or vandalism didn’t make it on the news broadcast.

Yousef explained that he was initially concerned because the Palestinian garb on the mannequin could potentially turn the many Palestinian-American women who live in the immediate area into targets for violence.

He'd heard from many in the community who shared this concerns.

What he did not yet know on Monday – as Amin would tell 6ABC – was the display wasn't created to “demonize” Palestinian women and “associate them with terrorism” as a way to support the border wall proposed by President Donald Trump.

"They want you to shut up. You're not allowed to say anything, no First Amendment, less tolerance." – Gaile Amin

Rather, her message was how people need to “learn from history,” and that the wall is necessary, in part, because she believes Palestinians lost their homes because they didn’t have adequate border control.

“When I first saw the display outside her house, without knowing anything about the person, I was scared for the community,” Yousef said, noting that he didn’t learn of her true inspiration until after she had spoken to television reporters.

“At first I thought this person’s crazy, but she’s not as crazy as I initially thought," he continued. "The second after that connection was made, I thought that Gail was partially right. There’s a level of sophistication (to the message.)”

That’s not to say that he doesn’t harbor any fear that someone might interpret the display in that dangerous way and attack someone dressed like the mannequin. He still thinks there’s a better way for Amin to have gotten her message out, whether that be social media or contacting news outlets.

Much like the ensuing uproar when people reported their “Hate Has No Home Here” or pro-Trump signs were being destroyed or stolen, resorting to crimes – even petty misdemeanors to stifle opposing political sentiments – is un-American.

“She has the right to express herself. She’s doing it on private property,” Yousef said. “I’m telling people who were upset about it not to react with violence, not to react with vandalism. We don’t want that kind of thing going on.

“It was the Philadelphian inside that person that did that, not the Palestinian or the Muslim in them. I’m offended for her. I’m a big proponent of the Constitution. I was asking for her to take it down herself, not for someone to take it down for her. She went from being in the wrong to being somewhat in the right because of this.”

"They want you to shut up. You're not allowed to say anything, no First Amendment, less tolerance," she said. "This is politics. People are not going to agree with you.

"I know some people don't agree with me. But, don't destroy property. Don't steal stuff. Don't knock off heads. What can we do to increase support for people's First Amendment rights? I'm ProFA, First Amendment, not AntiFA!"