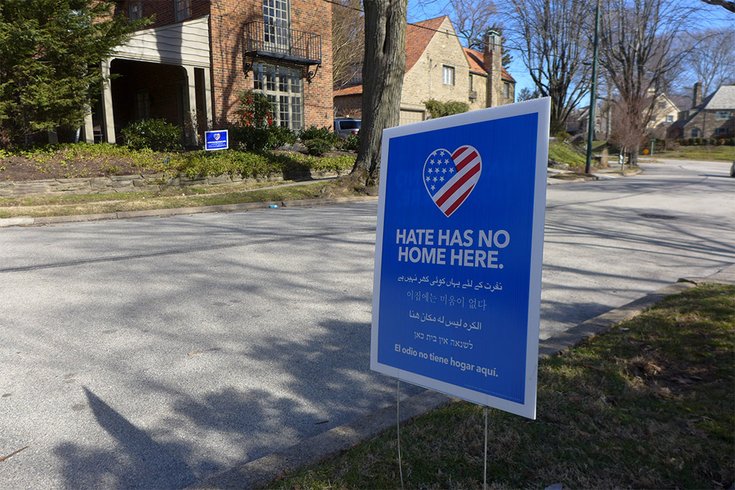 A "Hate has no home here" sign sits outside a home on Pleasant Street in Wyndmoor, Montgomery County. The signs have been at the epicenter of neighborly angst there in recent days.

Maybe it was just an isolated incident of a neighbor on one side of the political spectrum getting annoyed with a neighbor advertising their worldview with “Hate Has No Home Here” and "Black Lives Matter" signs.

Maybe it’s emblematic of a mindset that has some people so up in arms they are actually stealing those signs off lawns in the dark of night.

Whatever it is, things have gotten quirky and crazy in Springfield Township, Montgomery County in recent days.

Our tale starts on “on a street that’s predominantly liberal” in Wyndmoor.

There, a letter addressed to “residents” arrived at the home of Aaron, Rebecca and 8-month-old Vivian Stemplewicz on Wednesday. It was about the “Black Lives Matter” sign posted in their front lawn that was soon joined by a "Hate Has No Home Here" one.

Here’s what the Stemplewicz’s read when they opened up the handwritten envelope containing a typed screed:

I saw your BLM sign while walking my dog and I just had to laugh. Your ignorance is astonishing.

Since facts don’t seem to matter to you, I thought I’d reach out to educate you that racist Obama and racist Holder did everything they could to prosecute innocent White officer Darren Wilson, but failed miserably. You know why? Because Michael Brown did indeed attack him. The nation, blacks and liberals do indeed owe Officer Wilson an apology BLM was born out of the Michael Brown/White officer false narrative.

You’re of course welcome to put up a garish ‘no hate here’ sign or a BLM sign. But do know it only alerts everyone else with a basic education and common sense that you’re a racist hypocrite.

I could go on and on with facts but you’re a liberal Democrat which means your decision are made based on what is on the surface. It’s quite sad considering you’re an adult with voting rights.

Your neighbors in Wyndmoor

Aaron said he and Rebecca were shocked by the correspondence, so he posted a copy on the neighborhood’s Next Door app. That was then shared on Facebook, from where Township Commissioner Jeff Harbison shared it with his “Wyndmoor Email List.”

He included a message of his own in that post.

“While everybody is entitled to their own opinions, our community does not benefit from calling each other racists and sending inflammatory anonymous letters,” he wrote. “You are entitled to hate all you want, but let’s keep the dialog civil! Let’s do a better job of respecting each other.”

On Friday, Harbison told PhillyVoice that he’s brought township police into the fold, but they told him it “does not reach the level of intimidation.”

“You’re going to have people like this and even though (the letter) makes an articulate case backed up with facts, it’s a terrible tone and says some horrible things,” Harbison said. “When it’s something anonymous, slipped under someone’s door, you’re really violating someone’s personal space.”

"It’s actually brought everyone closer together than ever before. That’s ironic.” – Aaron Stemplewicz, Wyndmoor resident

Aaron’s home office is situated near the front of the house. While he doesn’t know who exactly sent it, he can see most passersby while sitting at his desk. Translation: it can only be one of a few folks who walk their dogs along the sidewalk.

“I’d be surprised if we were the only ones who received it,” he said, noting that his block saw an array of Hillary Clinton, Black Lives Matter and Hate Has No Home Here signs in recent months. “I don’t know if we have a curmudgeon living nearby who’s done this before, who mailed it because he didn’t want to risk being seen dropping it off.

“What my wife and I found interesting was that someone might have been trying to create some dissension or intimidation or whatever, but from the response on social media and in the neighborhood, it’s actually brought everyone closer together than ever before. That’s ironic.”

The Stemplewiczes actually taped the letter to their front door "with a note on it welcoming the person to come to our house to have a conversation about these issues."

"I doubt they will take us up on it," Aaron said, "but I guess what we need now is more dialogue, not less."

Harbison was also surprised that he didn’t hear complaints from other recipients – the “residents of” address made it look like junk mail in a sense – but mentioned a separate issue going on in the township’s Oreland section.

On a single block in what resident Bonny Davis calls a “sleepy little town,” multiple residents including a hearing-impaired couple report that “Hate Has No Home Here” signs have been stolen from their front yards in the past two weeks.

Davis, the township treasurer and tax collector, has lived in that neighborhood for three decades. Pilfered political signs aren't exactly a new dynamic, she said, but this time feels different.

She had one sign stolen off her lawn 10 days ago but got another one.

“It’s just gotten out of hand. You think you live in a nice town, and now there’s people sneaking onto your lawn at 2:30 a.m. to steal a sign.” – Bonny Davis, Oreland resident

Last weekend, Davis was asleep, recovering from hernia surgery. Her 81-year-old mother was there in caretaker mode since her daughter got home from the hospital earlier that day.

“She sees my motion lights go on around 2:30 a.m. and a shadowy figure walked past the window right outside, right up to the front door,” said Davis, who’d placed that new sign near the house in a feeble attempt to avoid another theft. “The door was open since she didn’t want to get up to let the cats in and out. She didn’t say anything to me in the morning, but I noticed the sign was gone later.”

“The fact that I now feel violated, that I can’t put one up because people will come to up to my front door in the middle of the night to steal it, is unacceptable,” she said. “People are leaving notes on them now like ‘if you steal this sign, I’ll donate $50 to the ACLU’ or ‘for everyone one they steal, I’m going to put two new ones up.’

“It’s just gotten out of hand. You think you live in a nice town, and now there’s people sneaking onto your lawn at 2:30 a.m. to steal a sign.”

She then mentioned that a neighbor “has pictures of the guy holding the stolen signs.” 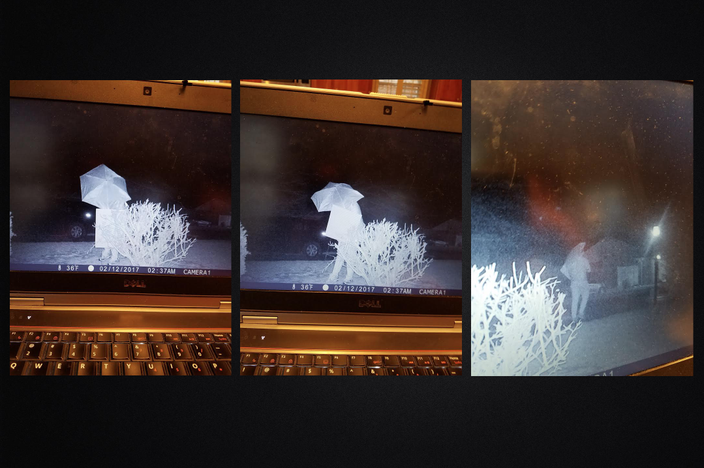 Springfield Township resident Tim McGinnis installed cameras outside his home to identify the anonymous thief who swiped 'Hate Has No Home Here' signs three times in recent days. He got some footage of the offender last weekend.

That neighbor is Tim McGinnis. He reacted to a wee-hours, floodlights mystery of his own a little differently after his second sign get stolen.

In front of his home, he installed “trail cams” frequently used by hunters, hoping to get footage should it happen a third time. It did.

“I woke up Sunday morning, and the sign’s gone. We pulled the chip, looked and boom, there he is at 2:37 a.m., tilting an umbrella down to shield his face like he knew the camera was there,” McGinnis said Friday. “We got freaked out because the infrared makes everything creepy. There’s no way he knew with 100 percent certainty that he wouldn’t be identified but still did it. He’s unhinged!”

He’s since put another sign up, and it hasn’t been removed. Yet.

With all of this action swirling around the Hate Has No Home Here signs, it was only natural to ask the woman who started it all for her thoughts.

In mid-December, Glenside’s Kate Thomson produced about 100 of them for friends and neighbors who loved the idea. She gave up counting after printing 6,000.

The Springfield Township thefts aren’t the only she’s heard about, but there are too many pressing issues out there to get sidetracked by it, she said.

“Why would anyone oppose an individual declaring that they don’t tolerate hate in society?” she said. “It’s a literal stake in the ground about what they believe. Everybody defines hate differently, so there’s room for interpretation sign by sign.”

She urged people to report any thefts and then replace them right away. It only takes five or 10 bucks to get a new one, after all.

“Don’t dwell on it,” she said. “You’re not going to be able to change the minds of some people. Just keep (making sure people know you’re anti-hate). Keep going.”