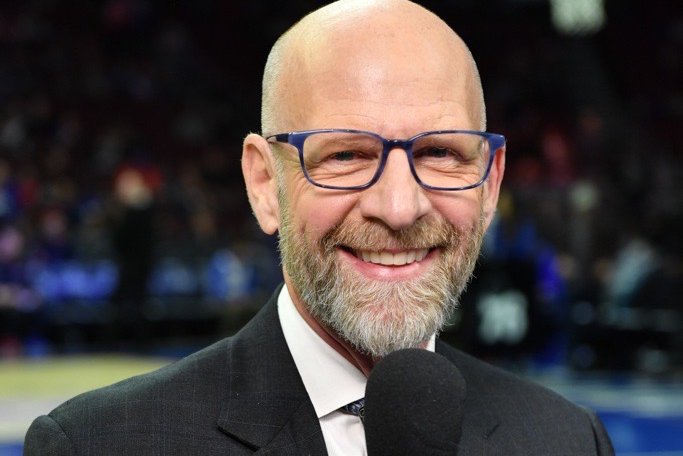 After a 27-year run calling games for the Philadelphia 76ers, beloved play-by-play announcer Marc Zumoff has announced his retirement.

Zumoff, 65, has been the voice of the Sixers through the team's euphoric peaks and Process-era valleys. Known for his situational phrases and masterful cadence, Zumoff grew to become a fan favorite in Philadelphia, a comforting presence among stalwarts like the Eagles' Merrill Reese and the late Harry Kalas for the Phillies.

NBA trade rumors: Damian Lillard may want out of Portland. Could Sixers trade Ben Simmons for him?

In a letter published on NBC Sports Philadelphia, Zumoff explained that he's retiring because he wants to spend more time with his wife, Debbie, and explore other avenues of life as he enters its "fourth quarter":

Gratitude is one of the qualities I've always worked mindfully to embrace. I'm not the voice of an NBA team without the help of hundreds along the way. As I ease into this next phase of my life, I will earnestly reach back to those individuals to express my gratitude.

But for now, allow me to thank you, 76ers fans, for the opportunity to be with you on this surreal ride. It's been a privilege to be welcomed into your homes. I've come to fully understand and appreciate the responsibility of being the voice of your team and I was truly honored to do so.

The Sixers released a statement celebrating Zumoff's time with the team. He will be honored during a home game next season.

"We sincerely thank Marc Zumoff for all he's done for this organization, this team and the city of Philadelphia over the last 27 years," Philadelphia 76ers Managing Partners Josh Harris and David Blitzer said. "We'll miss his iconic voice and trademark sayings, which have been staples during 76ers games for the better part of two decades. While we congratulate Marc on his retirement, we look forward to properly honoring and celebrating him at a home game during the 2021-22 season."

Zumoff first joined the Sixers broadcast team in 1982, serving as an in-studio host for pregame, halftime and postgame broadcasts. He started calling games for the team in 1994, two seasons before the Sixers drafted Allen Iverson to begin one of the most exciting, memorable eras in franchise history.

A Northeast Philadelphia native, Zumoff graduated from Temple University and won 19 Mid-Atlantic Emmy Awards for best sports play-by-play broadcaster during his time with the Sixers, among other accolades.

In his retirement letter, Zumoff said that he had always dreamed of becoming a play-by-play announcer for the Sixers. He rehearsed for the role during the era of Wilt Chamberlain in the late 1960s.

"I would take to turning the sound down during 76ers games on the TV and 'broadcasting' into my new cassette tape recorder," Zumoff wrote. "As I performed, I dreamt that I, one day, would be the voice of the Philadelphia 76ers."

In a video for NBC Sports Philadelphia, Zumoff's career was honored by NBA Commissioner Adam Silver, the "NBA on TNT" crew and Allen Iverson, among others.

Fans remembered Zumoff on Tuesday by sharing some of his most memorable calls and recognizing his contributions to the language of Sixers basketball.

A reddit user made this Marc Zumoff call sheet a couple of years ago: pic.twitter.com/DiDuGfPNiE

My fave Marc Zumoff call: The Iverson steal to beat the Wizards in 2004. Need a longer version of the end of this game with Zumoff’s call. pic.twitter.com/9EMOL2rgVF

Here's a look at more of Zumoff's best calls over the years.
In April 2003, Zumoff was part of the broadcast team that covered Michael Jordan's final game in the NBA as a member of the Washington Wizards. At what was then the Wachovia Center, fans who attended the game were given a poster with an Air Jordan sneaker on it and the words, "Those are some big shoes to fill."
In the world of Sixers broadcasting, the same will apply for the person who takes the mantle from Zumoff next season.