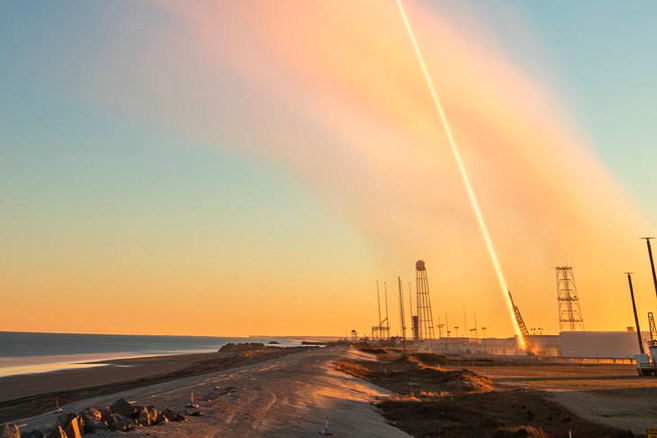 A rocket was launched from NASA's Wallops Flight Facility on March 3, 2021. The launch, part of an Air Force Research Laboratory study of the Earth's ionosphere, left a pink cloud of vapor spotted by people in Margate, New Jersey, and elsewhere on the East Coast of the U.S.

Residents of Margate were among those spooked last week by the sight of a strange pink mass hovering in the sky, leading to the usual speculation about alien activity, because why not?

The event was observed over the Jersey Shore town last Wednesday evening after sundown.

Pink ball in the sky over Margate pic.twitter.com/PzHFi7QGV6

I was driving home this evening and had to take a picture of this random pink cloud in the sky.
This picture doesn’t do it any justice. It was super vibrant and looked completely unreal. 💗☁️ pic.twitter.com/IyfzLk5apU

As it turns out, the pink cloud was caused by a NASA rocket launch at the Wallops Flight Facility at Wallops Island, Virginia. A three-stage suborbital sounding rocket was launched on the afternoon on March 3 on behalf of the Department of Defense, specifically the Air Force Research Laboratory.

"The launch was to study ionization in space just beyond the reaches of Earth’s atmosphere," NASA said. "After flying to an altitude of several hundred miles and about 500 miles off-shore, the rocket’s payload released a small quantity of vapor into the near-vacuum of space. There is no danger to public health or the Earth’s environment from the vapor release."

A spokesperson for NASA at Wallops Flight Facility said reports from people who saw the vapor cloud ranged from Massachusetts all the way south to Puerto Rico. NASA had issued an advisory about its plans for the experiment in the days before the launch.

I was very shocked to walk out of my front door to see a red cloud like that, after the sun had already set. It was beautiful to witness. pic.twitter.com/Q8wRtK9YY0

The pink clouds were caused by 60 pounds of a powdered material that was heated to a high temperature by a fuel mixture and then released into the atmosphere in a gaseous form, an Air Force Research Labs director told SpaceNews.

The Air Force research team behind the experiment is based out of New Mexico. The sounding rocket — a test vehicle used for these kinds of experiments — was the first launched by Space Vector Corp., a California company contracted by the Air Force. Another aeronautics contractor, Northrop Grumman, also is involved in the research program.

NASA and the Department of Defense have long been studying the ionosphere, the uppermost part of Earth's atmosphere.

The electrically charged expanse, ranging from about 50-1,000 kilometers above Earth, is largely a product of ultraviolet radiation from the sun. Its influence on long-distance radio communication is a growing area of research — often controversially, as with the Alaska-based High Frequency Active Auroral Research Program, abandoned by the Air Force, Navy and DARPA amid budget cuts in 2014.

In 2016, Drexel University researchers were awarded a defense contract to study the effect of ionized plasma gas on radio signal transmission and daytime interference in the ionosphere.

No aliens at the Jersey Shore — at least not this time.