By Tuesday afternoon he had tried take the comment back, but by then his remarks had already been labeled as 'offensive' and 'irresponsible' 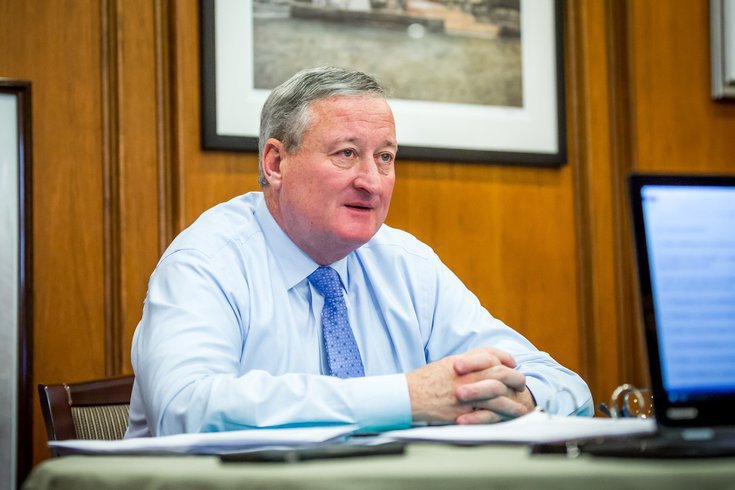 Other city leaders on Tuesday criticized Mayor Jim Kenney for his comment that he looks forward to no longer being mayor of Philadelphia. Kenney, pictured in a file image above, said this during a briefing about two police officers who were shot while working at Monday night's Welcome America fireworks show along the Ben Franklin Parkway.

Some Philadelphia City Councilmembers and other officials on Tuesday are calling for Mayor Jim Kenney to resign after he said he'd "be happy when I'm not mayor" at a press briefing about the two police officers who were shot during the Welcome America fireworks show Monday night.

By Tuesday afternoon, Kenney had tried to walk back his comments, explaining that he was overwhelmed and frustrated with the ongoing problem of violence in Philadelphia, and he let those emotions out when answering questions from reporters outside Jefferson University Hospital.

But by then, what he said had already sparked criticism among Philly residents and city leaders, particularly among councilmembers Allan Domb and Derek Green and City Controller Rebecca Rhynhart, who all are among a large field of potential mayoral candidates in 2023.

Domb was the first city official to directly call for Kenney's resignation, tweeting that "Philadelphia is in a crisis and needs a mayor who wants the job and all its responsibilities. It is beyond time for @PhillyMayor to resign for the good of the city and its residents."

Philadelphia is in a crisis and needs a mayor who wants the job and all its responsibilities. It is beyond time for @PhillyMayor to resign for the good of the city and its residents. https://t.co/coZyOTRBQH

The real estate developer is a frequent critic of Kenney on taxes and city spending, Domb previously has called on the Kenney administration to utilize the city's colleges and universities to help assist with violence prevention.

During the briefing early Tuesday morning, Kenny had said "I'm concerned every single day," about the gun violence problem in Philadelphia, and especially so when the city hosts major events, like Welcome America.

"I'm waiting for something bad to happen all the time," Kenney said. "I'll be happy when I'm not mayor and I can enjoy some stuff."

When a reporter questioned if he really is looking forward to no longer being Philadelphia's mayor, Kenney responded, "Yeah, as a matter of fact."

Moments before, the mayor had said, "We live in America, and we have the Second Amendment. And then we have the Supreme Court of the United States telling everyone they can carry a gun where ever they want. It's like Dodge City," Kenney said. "We have to come to grips with what this country is about right now. We had a beautiful down out there today except for some nitwit either shooting from a window or shooting from somewhere, who has a gun that probably shouldn't have had it."

In 2021, there were 562 homicides in Philadelphia, making it one of the most violent years on record. Through July 4, there have been 267 homicides this year. While the Kenney administration has implemented community-based gun violence prevention measures, the mayor has been routinely criticized for violence in the city.

"If I had the ability to take care of guns, I would," Kenney said Tuesday morning when asked about his resolve amid an influx of gun violence throughout the city in recent years. The mayor pointed to the state legislature and U.S. Congress as major obstacles to addressing gun violence in the country. "Until Americans decide that they want to give up the guns, and give up the opportunity to get guns, we're going to have this problem."

The full clip of Kenney speaking with reporters on Tuesday morning, during the briefing about the police shootings, is available from NBC10.

Rhynhart has been consistently at odds with the Kenney administration since she was elected in 2018, particularly about what she says is its failure to comprehensively address gun violence. Rhynhart did not say the mayor should resign, but described his comments the "most irresponsible statement."

"Our city needs needs leadership, not someone who doesn't want the job. We deserve better," Rhynhart tweeted.

Wow. This is the most irresponsible statement. Our city needs leadership, not someone who doesn’t want the job. We deserve better. https://t.co/sKm7VjtnIf

Councilmember Green called for Kenney to resign. He said everyone is exhausted by the violence in Philadelphia, and he said the city needs a mayor with vision and passion.

@JimFKenney We are all exhausted by the level of gun violence in our City. However, our City needs someone now with the passion and vision to lead us forward. Resign. https://t.co/Njs8YHFvIA

And Councilmember Helen Gym, in a series of tweets, said it was "offensive" that Kenney would suggest "that he doesn't have to care when he's not in office."

"We all live and love this city," she wrote. "Put your big boy pants on and get to work!"

Jim Kenney may be defeated but this city won’t be. There are thousands of lives on the line in the remainder of his term. We must resist hopelessness. There are programs that work, interventions that can happen, and above all leadership that leads when our people are suffering.

By Tuesday afternoon, after Kenney was broadly criticized for his comments, the mayor expressed his love for Philadelphia and its residents, and tried to assure everyone he is grateful for his job.

"I care deeply about the safety of our residents and the future of our city, and that's why I'm disappointed with how I conveyed my sentiments last night," Kenney said. "I made Philadelphians feel like I don't care, and that cannot be further from the truth. I've said it many times before, I lay awake at night thinking about the challenges facing the residents of our city and what more we can be doing or doing differently to solve them. Being mayor comes with a lot of restless nights, so I am looking forward to a good night's sleep."

The two police officers who were shot and injured on Monday night had been working as part of the security detail around the Benjamin Franklin Parkway during the Welcome America concert and fireworks.

They were near the 2500 block of Spring Garden Street when they were struck by bullets. Neither officer reported hearing gunfire. One officer, 36 years old, is a member of the Philadelphia police's highway patrol unit. The other, 44 years old, is a deputy with the bomb squad of Montgomery County Sheriff's Office.

Both were taken to Thomas Jefferson University Hospital, treated for their injuries and released within hours.