Michelle Wolf on Trump, comedy and that White House dinner 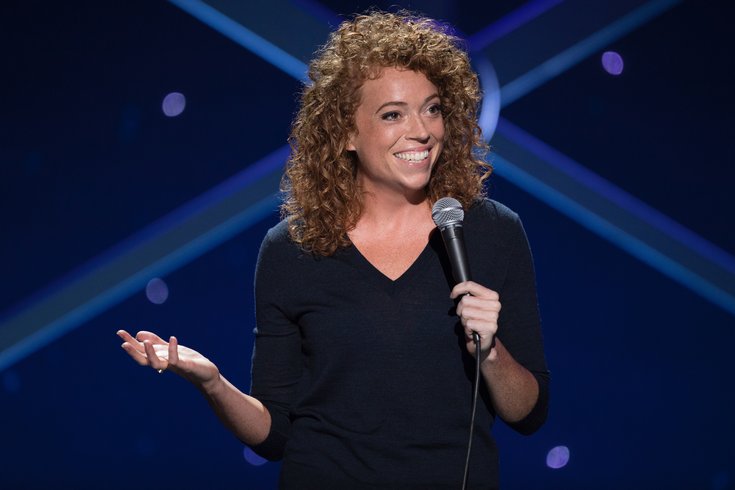 Michelle Wolf during a comedy special on HBO

Wolf, 33, who will perform Thursday through Saturday at Punchline Philly, looks back at the impact of her 19-minute roast, comments on the state of female comedians and where you might find the Hershey native, who ran college track, when she's not onstage in Philly.

Q: You've become quite the polarizing figure since the correspondents dinner. Were you surprised that so many people were offended since you were just joking like comics do during roasts?

A: One guy said to me, 'you were really harsh on Sarah Huckabee' and I said, 'have you seen other roasts?' That's what people do during roasts! People made such a big deal about what I said about Sarah Huckabee. The media talks about that but they don't talk about how the media loves Trump. He's helping the media make a lot of money. It's the same story over and over again with Trump. There's an abundance of other news but it's not as sexy a story as anything with Trump.

Q: But it makes sense that you roasted Huckabee since shouldn't a female comic goof on a female political figure as opposed to roastmaster general Jeff Ross slicing and dicing a target?

A: Sure. Everyone gets upset about how I joked about her makeup but if you think that was what my material is about you're not a very smart person.

Q: Your jokes were all about her lies.

A: Yes, but when people read today it's all about click baiting headlines. How many people read the actual story?

Q: Kathy Griffin nearly lost her career due to a photo of her and a ketchup stained mask of Trump. You were heavily criticized by some for your treatment of Sanders. How badly are female comic's pushed around?

A: I think the people that hired me for the correspondents dinner probably thought, 'she's a woman,' she'll be easy on everybody.' I think people can be more critical of women.

Q: A generation ago it appeared that women had the power in comedy. Joan Rivers was the first female to host a late night talk show on a network. There were a number of sitcoms starring women, such as 'Roseanne,' 'Grace Under Fire' and 'Caroline in the City.' What happened to women in comedy?

A: Joan Rivers got to host a talk show at the cost of severing all ties with Johnny Carson. He tried to ruin her career. I think It's all about women having to say 'I want this and I don't fucking care who wants to step in front of me.' Joan Rivers kept fighting.

Q: Rivers was good friends with Trump. She told me he was a big fan of comedians. How do you think the President is dealing with so many comics slamming him?

A: I can't imagine that he's really a fan of comedians since no one has ever seen him laugh.

Q: You worked in corporate before you turned to comedy just like Jeff Foxworthy. Was that a difficult transition?

A: I got fired on purpose I got over nine- months of severance and saved up. I had a year to get this going. I wasn't going to spend my life in a corporate job.

Q: What did you learn writing for Seth Meyers and Trevor Noah?

A: I learned about timing from Trevor and the economy of words from Seth.

Q: When you're not performing in Philly, where can we find you?

A: Out running somewhere.