Authorities seized 180 animals from a home in Brick Township last month. Daisy, a bloodhound who had been microchipped, returned home on New Year's Day 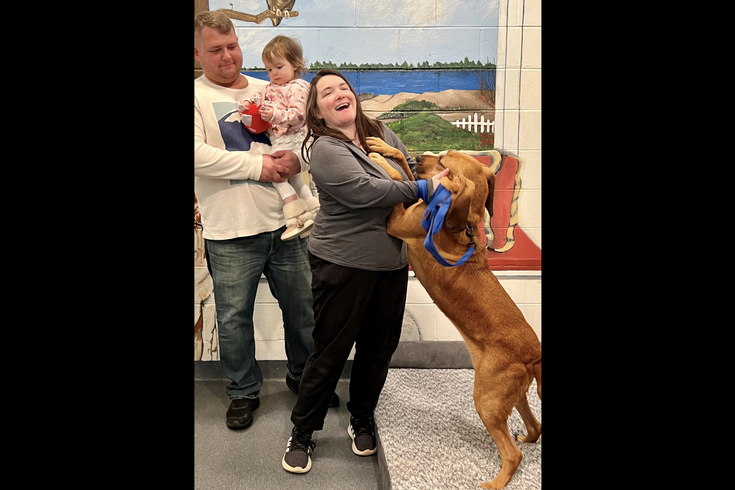 Daisy, a bloodhound who was found at a puppy mill in Brick Township, New Jersey in December, rejoined her family from Tennessee on New Year's Day.

A Tennessee family drove 11 hours to New Jersey last weekend to start the new year by reuniting with its pet dog, which went missing two years ago. The bloodhound, named Daisey, was among 180 animals who were seized last month from a puppy mill in Brick Township.

The Ocean County Health Department shared several photos of the Price family getting a warm welcome from Daisy on New Year's Day.

Daisy had been microchipped, which enabled the Ocean County Animal Facility in Jackson Township to notify the Price family, the health department said. It's unclear how the dog went missing and ended up in New Jersey.

On Dec. 4, two women were arrested at a home on Arrowhead Park Drive in Brick Township after authorities received an anonymous complaint about animals in the home.

"The home was full of animal waste and the animals were living in horrible and inhumane conditions," Brick Police Sgt. James Kelly told the Asbury Park Press.

Emergency crews removed 135 dogs and 45 cats over 10 hours. The officers who responded to the scene initially had estimated that about 30 animals were inside the home. They reportedly were overpowered by the stench coming from the property when they spoke with the owners outside.

"Most of them seemed to be friendly and in decent shape," Lippai told the Asbury Park Press.

Aimee Lonczak, 49 and Michele Nycz, 58, were each charged with animal cruelty and child endangerment. Lonczak's 16-year-old child also lived at the property, which was condemned by the local building and code department.

The Humane Society defines puppy mills as "inhumane high-volume dog breeding facilities" where profits from selling puppies are prioritized over the health of the pups and their mothers.

A New Jersey law, enacted in 2015, sought to crack down on puppy mills by improving standards for where – and how – pet stores could acquire puppies, in addition to requiring disclosures for pet buyers. Efforts to strengthen those laws in subsequent years, including a push by former state Sen. Ray Lesniak, have faced resistance from smaller "hobby breeders" who believe more commercial regulations could lead to unintended consequences.

Another law, signed by Gov. Phil Murphy in 2019, prohibits the leasing of dogs and cats as a transition to full ownership.

Puppy mills in Pennsylvania also have come under greater scrutiny in recent years, including a push by some lawmakers to adopt standards similar to those in New Jersey. Victoria's Law, named after a German Shepard that was rescued from a puppy mill in Lancaster County, would prohibit the sale of dogs, cats and rabbits in pet stores throughout Pennsylvania unless they are sourced from shelters and rescues. The legislation has not been put to a vote, despite advocacy efforts.

"The Humane Society of the United States urges lawmakers to protect consumers and animals from the cruel puppy mill pipeline by supporting both H.B. 1299/S.B. 234 to stop the sale of puppy mill puppies in pet stores and H.B. 2311 to stop the financing of dogs or cats," Kristen Tullo, Pennsylvania State Director for the Humane Society, told Lancaster Online last summer.

"Breeders and facilities without state or federal licensing often fly under the regulatory radar unless caring people sense something suspicious — or duped consumers purchase sick or dying puppies — and lodge official complaints," the report said. "That means dogs kept in illegal kennels on the fringes — often by people who won't provide proper care because it would cut their profits — are most likely to suffer the worst conditions."

Many of the animals seized from the home in Brick Township have been sheltered at the Ocean County Health Department's facilities in Jackson and Stafford, along with an overflow shelter in Barnegat. The animals remain the property of Lonczak and Nycz pending a judge's transfer of them to the health department. That would allow the animals to be adopted, if they meet health and temperament standards.