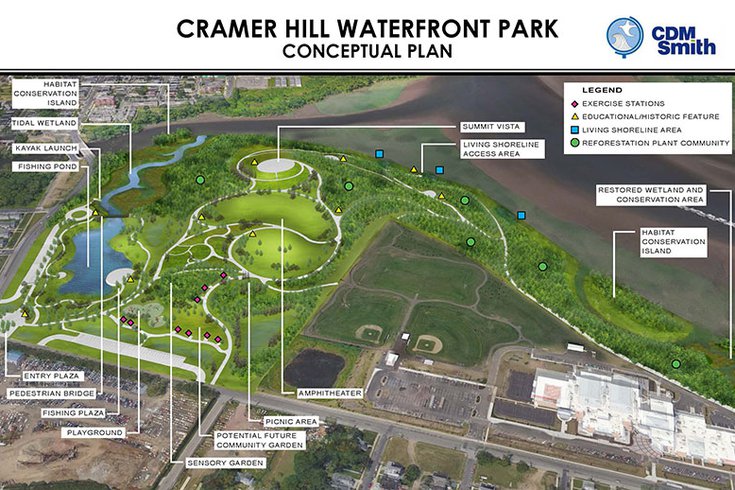 A conceptual plan of the Cramer Hill Waterfront Park.

Fifty years after Camden decommissioned its city dump on the Cooper River, officials and residents of the Cramer Hill neighborhood have reclaimed the space with a modern waterfront park.

Work on the $48 million, 62-acre park, which features a fishing pond, kayak launch and 8 miles of multi-use paths began in 2016. Officials held a soft opening last weekend and hope to hold a ribbon-cutting ceremony for the general public in the coming weeks.

The Harrison Avenue Landfill, or "trash mountain," as the site was once informally known, operated from 1952 to 1971.

Even after the dump was officially shuttered, it continued to be a nuisance to Cramer Hill residents and the Cooper River ecosystem becoming an illegal dump site where toxic chemicals leeched into the water and surrounding landscape.

Rehabbing the property required workers to remove much of the trash, although some remains below a layer of soil, and was funded with money from penalties the New Jersey Department of Environmental Protection lodged against polluters.

NJDEP's Office of Natural Resource Restoration and Division of Coastal Engineering worked with the Camden Redevelopment Agency, a branch of the city government, to complete the project.

"I could never have imagined the transformation of this former landfill into such a beautiful community asset," said Camden's newly-elected Mayor Vic Carstarphen, who grew up in Cramer Hill.

"It's an investment in the quality of life for all our residents and a symbol of revitalization for the community," he said.

Although the city owns the park, Camden County will maintain it. The Camden County Metro Police Department, which polices the city, will install an extensive video surveillance system.

The park will be a keystone in two trail systems.

One is a 13-mile long, water trail that will allow boaters to experience the Cooper River ecosystem and connect to the Delaware River. The other is the Camden County Link Trail system, a 33-mile, multi-use path that's under construction.

The park is not the only new development sprouting up along the Cooper River in Cramer Hill.

The Salvation Army Kroc Center was constructed on the other 24 acres of the remediated dump site in 2014. The facility features a swimming pool, gym and other recreational facilities and hosted former President Barack Obama when he visited Camden in 2015.

Additionally, over the summer plans to completely reconstruct Ablett Village were announced by the U.S. Department of Housing and Urban Development's Secretary Marcia Fudge, who visited the site with state and local officials. Ablett Village is a 306-unit public housing complex in Cramer Hill constructed in 1943