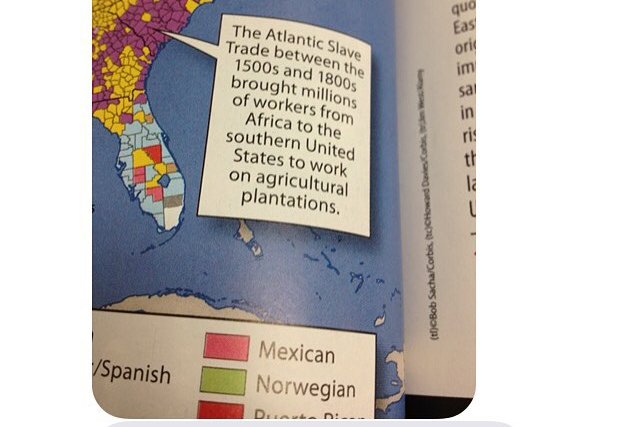 Houston-area mother Roni Dean-Burren called out McGraw-Hill for its textbook's interpretation of slavery.

Textbook publisher McGraw-Hill announced Friday that it will rewrite a section in one of its books after a Houston-area mother complained about the wording used to explain the role of slavery in bringing Africans to America.

Roni Dean-Burren took to social media last week after her son made her aware of the wording of a passage in his 9th-grade "World Geography" textbook that refers to African slaves as "workers" and "immigrants."

"The Atlantic slave trade brought millions of workers...notice the nuanced language there," she wrote in the post. "Workers implies wages...yes?"

The post gained a lot of attention and feedback from other concerned parents.

After reviewing the section, McGraw-Hill acknowledged that it "did not adequately convey" the migration of African slaves.

"We believe we can do better," the company said in a Facebook post. "To communicate these facts more clearly, we will update this caption to describe the arrival of African slaves in the U.S. as a forced migration and emphasize that their work was done as slave labor."

The changes will be made in the digital version of the program immediately and will be included in the program's next print run, the publisher said.

Still, some did not feel the response was enough.

One commenter urged the publisher to replace the textbooks.

"It's unacceptable that schools who cannot afford to replace your rewriting of history should have to keep those books until they can afford new ones," the comment reads. "Most likely those schools who cannot will not have access to online versions for all students."