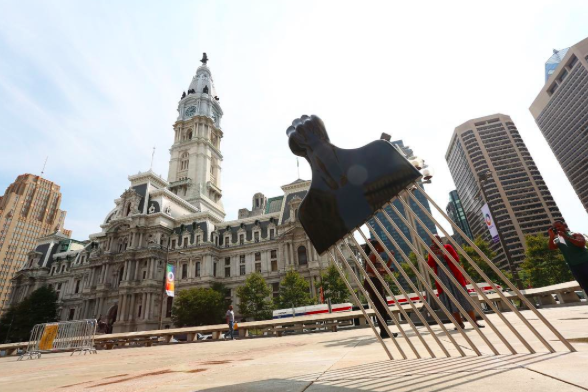 "All Power to All People," a temporary sculpture installed at Thomas Paine Plaza.

In what has been a tense month surrounding the future of Philadelphia's monument to former mayor and police commissioner Frank Rizzo, an artist's bold statement has entered the conversation at Thomas Paine Plaza.

Mural Arts Philadelphia on Tuesday unveiled a new sculpture, "All Power to the People," that drives the tines of an Afro pick into the surface of the plaza, complete with a clenched fist at the other end.

Created by photographer and conceptual artist Hank Willis Thomas, the sculpture is part of Mural Arts' annual Monument Lab series, a curated collection of works that stand as a public art and history project on Philadelphia's original squares.

The Afro pick, framed as an intervention around identity and representation in Philadelphia, rises eight feet tall and weighs close to 800 pounds, according to a description of the project.

Thomas said the symbol "exists today as many things to different people: it is worn as adornment, a political emblem, and signature of collective identity. The Afro pick continues to develop itself as a testament to innovation.”

Thomas added that the sculpture, only a temporary installation, is intended "to highlight ideas related to community, strength, perseverance, comradeship, and resistance to oppression.”

Just paces away, the Frank Rizzo statue has again come under siege in the aftermath of the violent protests in Charlottesville and the police shooting of North Philadelphia resident David Jones. The statue has long been a source of conflict between those who support honoring the former mayor's legacy and opponents who believe his public policies deepened racial inequality and oppression in Philadelphia.

In the weeks since members of Black Lives Matter vowed to tear down the statue, vandals spray-painted the words "Black Power" on it, threw eggs at it and defaced a Rizzo mural in South Philadelphia. As police erected barriers to protect the site, it became a focal point for returning protesters.

Philadelphia Mayor Jim Kenney, joined by other officials who welcomed debate about the Rizzo statue, said the city's Art Commission will determine its fate. Residents have been invited to submit their own ideas up until Sept. 15, with a decision on what will happen expected by the end of the month.

Mural Arts characterized the Afro pick, often associated with the Black Panther movement, as a pop art gesture that commemorates the lack of statues that equal justice and belonging.