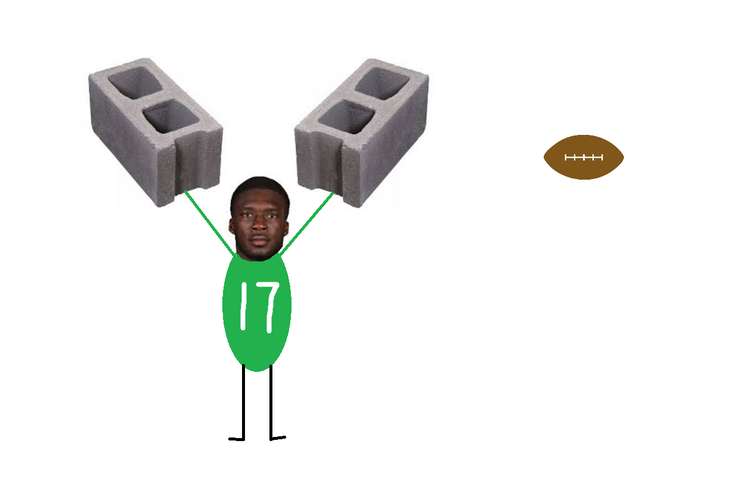 Personally speaking, July 24, 2017 is a day that will go down in infamy. It was the day I learned that Microsoft plans on killing off MS Paint, their longtime remedial graphics editing application.

As you may or may not know, I often like to incorporate poorly drawn MS Paint stick figures into my articles, some of which I animate using a combination of MS Paint and Windows Movie Maker.

With this horrifying announcement from Microsoft, I figured I'd post my personal 10 favorite animated MS Paint creations, counting down from 10-1. And yes, I'm fully aware this is very self serving, but seeing as this is likely the end of my career, just let me have my moment, OK?

Former Eagles backup quarterback Matt Barkley once challenged me to some kind weird skills competition (or something) after I wrote that he didn't have a strong arm in my practice notes.

After he was traded to the Cardinals for a conditional seventh round pick, I showed what Bruce Arians' reaction was like after initially working out his new QB:

During the Eagles' awful 2015 season, all their coaching staff talked about was "execution," or lack thereof. So I made an "Execution Dance" to the music from "Rock Me Amadeus," obviously. There are quite a few stick figure animations within the following video:

To note, my "Eagles Execution Dance" did not earn me a Pulitzer, which still bothers me to this day.

Zach Ertz got almost no yards after the catch last season, which I pointed out, in stick figure form.

After Lane Johnson's second suspension in which Johnson didn't exactly take much accountability, I pointed out that the real culprit was Dennis Kelly, who at the time was Lane's backup.

During training camp one year (2015, I think?), radio hosts Josh Innes and Mike Missanelli showed up at practice one day (a rare thing for either person). Innes and Missanelli had competing time slots on WIP and 97.5 the Fanatic, respectively. During practice, Innes got in Missanelli's face for some reason, and Missanelli gave him a little head fake, which made Innes tuck tail and back off very quickly. I captured the moment here:

To note, thankfully, Innes' five minutes of fame are over and he left town as a failure. Bye.

You know how when you press down on one of your apps on your iPhone and they all shake like they're afraid they're going to get deleted? Well that's how a bunch of Eagles players must have felt after the 2017 NFL Draft.

OK, so this animation is like a B-, at best, but because (I think) I put it up on Twitter the night the Cowboys lost to the Packers in the playoffs, it drew all kinds of anger from Cowboys fans, which is always fun.

Every time Nelson Agholor dropped passes last season, it was a layup to just post the following gif on Twitter.

A reader eventually suggested that I swap out the cinderblocks for crying Jordan, so I obliged.

2) Ryan Mathews gets launched into the sun

A couple weeks after Ryan Mathews fumbled away a potential win over the Detroit Lions last season, he fumbled once again in a clock-killing scenario against the Minnesota Vikings. I suggested that cutting him wasn't good enough, and that the Eagles needed to take stronger measures.

After the embattled Alex Henery struggled mightily during the 2013 season, and then 2014 training camp, fans were terrified of the thought of going into the season with him as the team's kicker. Henery's 2014 training camp was so bad that the Eagles traded for Cody Parkey in the middle of the preseason, and Parkey proceeded to emphatically win the job away from Henery.

Apparently, someone showed this gif to Parkey, and he was borderline horrified.