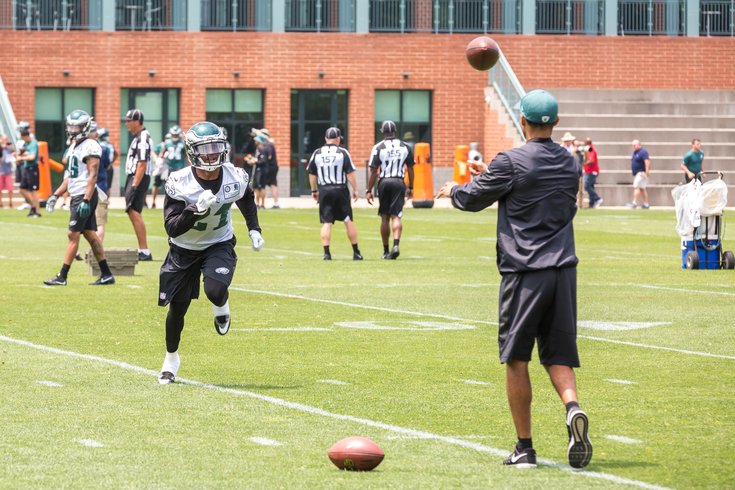 Finally, football is here, as the Eagles will start training camp with quarterbacks, rookies, and select veterans taking the field bright and early Monday morning.

Here are the five best training camp battles to watch this summer.

Brandon Graham will start at one defensive end spot for the Eagles in 2017. On the other side, there will be a great competition.

After the Eagles made the obvious decision to release Connor Barwin prior to the draft in a money-saving move, they were left with a gaping hole at defensive end. First, they signed Chris Long, who turned 32 years old this offseason. Long is more of a traditional 4-3 defensive end than Barwin was, although, like Barwin, Long's career is in its waning stages.

Soon after, the Eagles chose Derek Barnett, an extraordinarily productive player in college, with their first round pick. Barnett looked the part of a starting defensive end at times in practice during the spring, but his proving ground will come when they put on the pads.

And then, of course, there's Vinny Curry, who signed a lucrative contract during the 2016 offseason before having a wholly disappointing 2016 season. Curry believes he'll be much better in 2017 because he's healthy.

Long, Barnett, and Curry will all get playing time in 2017, assuming they stay healthy, but clearly, whoever starts will likely see significantly more snaps than the other two.

It seems very likely that Jalen Mills will have a prominent role at corner this season for the Eagles as a starter, but the other starting spot could be up for grabs. The two main competitors for that job are veteran Patrick Robinson and rookie third round pick Rasul Douglas.

Robinson has experience on his side, as he has started 49 games over a seven-year NFL career. However, he is very clearly a Band-Aid signing designed to get the Eagles through this season, and not a long-term solution.

The Eagles hope that Douglas can be a long term solution, and he will be given every opportunity to show that he deserves to start. In spring practices, we identified Douglas as one of five Eagles who impressed. If he can keep it up through the summer, expect Douglas to be lined up on the outside Week 1.

Four out of five spots along the Eagles' offensive line are set in stone, barring injury or a trade (unlikely at this point) of Jason Kelce. The only spot potentially up for grabs is at left guard.

Isaac Seumalo got the first crack at the starting LG spot during spring practices, but he'll be challenged by incumbent starter Allen Barbre. A season ago, Barbre played reasonably well at left guard, before struggling when he was asked to fill in at right tackle. Seumalo has the opportunity to become a long-term starter on the Eagles' offensive line, whether that be at guard or center. He'll have to earn his spot at left guard in 2017.

Backup safety? Really? Yes, really. Last year, Jaylen Watkins played 388 snaps as the third safety. In 2015, Ed Reynolds played 310 snaps with the regular defense, Chris Maragos played 304, and Watkins played 83. In other words, it's a sneaky-important position, especially considering that Malcolm Jenkins will probably be the first player to fill in at corner if someone goes down.

The two players battling it out for that spot are Watkins and Terrence Brooks. As we mentioned in our safety training camp preview, Brooks was impressive during spring practices, and has the ability to deliver big hits over the middle.

This is less of a "mano-e-mano" battle between two guys, and more of trying to figure out what roles each back will play in the regular offense. The Eagles will go with a committee approach in 2017, but how well guys like LeGarrette Blount, Darren Sproles, Donnel Pumphrey, and Wendell Smallwood play in training camp will tip the scales on how often they are used during the regular season.